Permafrost: how much methane is being produced and released into the atmosphere 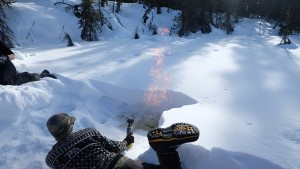 Considerable amounts of methane, one of the major greenhouse gases, are sequestered in sediment under the permafrost surrounding the Artic Circle. However, global warming has caused parts of the permafrost to thaw and form lakes that are now “hot spots” for methane release into the atmosphere, which, in turn, heats up the atmosphere even more. Ben-Gurion University of the Negev scientists have estimated how much methane is produced and released by these lakes and what the production mechanisms are. This information can be used in climate global warming models.

Prof. Orit Sivan and lab members Efrat Russak, Andre Pellerin, Yarden Gerera and Noam Lotem returned from another field campaign in recent months. They sampled several actively expanding thermokarst lakes in central Alaska, where, over time, the methane is released from the thawing permafrost into the water and the atmosphere.

An article about their findings based on a previous sampling campaign was published recently in the prestigious peer-reviewed journal Global Change Biology.