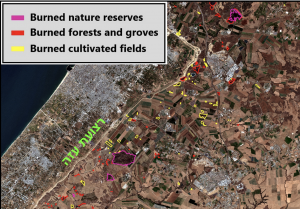 Ben-Gurion University of the Negev (BGU) researchers have developed a remote sensing algorithm that analyzes satellite images to identify and assess fire destruction caused by kites and other incendiary devices.

Prof. Arnon Karnieli, head of the Remote Sensing Lab in the BGU School of Sustainability and Climate Change, developed the AFRI (Aerosol Free Vegetation Index) algorithm, to see through even heavy smoke cover, and locate damaged areas. AFRI has been adopted by the European Space Agency (EUMETSAT) as a standard course of practice and will soon be deployed by Israeli agencies as well; In addition to its wartime application, AFRI’s has proven a be a valuable tool to help firefighters map fire-scarred areas safely and efficiently.

“The spectral signal of green agricultural lands is the same with or without a thick pall of smoke.” Karnieli says. “Satellite images taken over a number of days can differentiate between newly burned land and older damage.”

Using the algorithm, the researchers determined that in May 2021, during Operation Wall Guard, approximately 3,200 (13,050 dunams) acres of Israeli forest, reserves and farmland burned around Gaza. 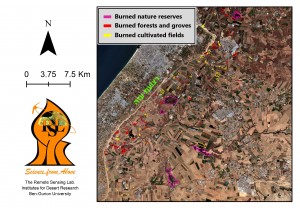 Ben-Gurion University of the Negev (BGU) is the fastest growing research university in Israel. With 20,000 students, 6,000 staff and faculty members, and three campuses in Beer-Sheva, Sde Boker and Eilat, BGU is an agent of change, fulfilling the vision of David Ben-Gurion, Israel’s legendary first prime minister, who envisaged the future of Israel emerging from the Negev.

BGU is also a university with a conscience, active both on the frontiers of science and in the community. Over a third of our students participate in one of the world’s most developed community action programs.