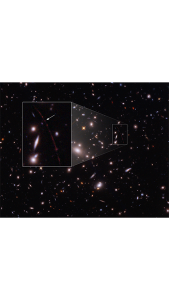 In a collaboration including researchers from Ben-Gurion University, the Hubble Space Telescope has established an extraordinary new benchmark: detecting the light of a star that existed within the first billion years after the universe’s birth in the big bang—the farthest individual star ever seen to date.

The find is a huge leap further back in time from the previous single-star record holder; detected by Hubble in 2018. That star existed when the universe was about 4 billion years old, or 30 percent of its current age, at a time that astronomers refer to as “redshift 1.5.” Scientists use the word “redshift” because as the universe expands, light from distant objects is stretched or “shifted” to longer, redder wavelengths as it travels toward us.

The newly detected star is so far away that its light has taken 12.9 billion years to reach Earth, appearing to us as it did when the universe was only 7 percent of its current age, at redshift 6.2. Usually at these distances we can observe galaxies containing billions of stars, and the smallest objects previously seen at such a great distance are clusters of stars, embedded inside early galaxies. Until recently, the possibility to observe a single star at such a distance would be considered fantasy. But a cosmic alignment of a massive cluster of galaxies between us and the distant star, magnified the star by at least a few thousand times and thus essentially allowed the researchers to observe a single star from the early universe. A star, that without the aid of lensing, there would have been no chance to observe.
“We almost didn’t believe it at first, it was so much farther than the previous most-distant, highest redshift star,” said astronomer Brian Welch of Johns Hopkins University in Baltimore, lead author of the paper describing the discovery, which is published in the March 31 issue of the journal Nature. The discovery was made from data collected during Hubble’s RELICS (Reionization Lensing Cluster Survey) program, led by co-author Dan Coe at the Space Telescope Science Institute (STScI), also in Baltimore.
Massive bodies bend spacetime such that they effectively create a lens in the sky. “The lensing phenomenon opens a door to learn about dark matter and distant galaxies”, says Prof. Adi Zitrin from Ben-Gurion University and one of the lead researchers of the study, “but usually the magnification from lensing reaches an order of a few”, he added. “A gravitational lens, similar to a regular lens we know from everyday life, forms regions of high magnification that are called caustics, where light rays focus. A similar feature can be seen on the bottom of a pool on a sunny day from ripples in the water. The lensing magnification at the caustic of a gravitational lens can be very high, and even reach millions”, adds Zitrin.
But the higher the magnification, the smaller the region it magnifies. It is therefore rare to find a star that exactly aligns on the caustic of a galaxy cluster lens. In fact, only in 2018, with the discovery of the first lensed, cosmologically distant star, it was properly understood that by using gravitational lensing, it was possible to see single stars at these distances.

“The current discovery has another important aspect to it”, says Zitrin, “as it also opens a door to learn about stars in the early universe, where we have little information on their physical characteristics and their contribution to the early ionization of hydrogen throughout the universe.”

The research team estimates that Earendel is at least 50 times the mass of our Sun and millions of times brighter, rivaling the most massive stars known. Welch called the highly magnified star Earendel, which means “morning star” in Old English.

Since the detection of the first lensed cosmological star in 2018, a couple of other such high-magnification events have been detected but at somewhat smaller distances. Various groups try to focus on and monitor galaxies that happen to sit on caustics, waiting for one of their stars to approach the caustic and light up telescopes on Earth and in space. Zitrin’s group is a member of various such programs with the Hubble and James Webb Space Telescopes.

Astronomers expect that Earendel will remain highly magnified for years to come. It will be observed by NASA’s James Webb Space Telescope. Webb’s high sensitivity to infrared light is needed to learn more about Earendel, because its light is stretched (redshifted) to longer infrared wavelengths due to the universe’s expansion.

“With Webb we expect to confirm Earendel is indeed a star, as well as measure its brightness and temperature,” Coe said. These details will narrow down its type and stage in the stellar lifecycle. “We also expect to find the Sunrise Arc galaxy is lacking in heavy elements that form in subsequent generations of stars. This would suggest Earendel is a rare, massive metal-poor star,” Coe said.
“With Webb, we may see stars even farther than Earendel, which would be incredibly exciting,” Welch said. “We’ll go as far back as we can. I would love to see Webb break Earendel’s distance record.”
Zitrin says that he indeed expects Webb to detect stars even farther away. “Thanks to the spectral shape of stars, which follows what’s called a blackbody, the redshifted spectrum at large distances compensates for the flux loss due to the larger distance, and so we should see lensed stars at even earlier times. We hope that with this phenomenon we will be able to see the first stars that formed in the universe.”
The research contribution from Ben-Gurion University was supported by a fund from the Ministry of Science and Technology, Israel.

The Hubble Space Telescope is a project of international cooperation between NASA and ESA (European Space Agency). NASA’s Goddard Space Flight Center in Greenbelt, Maryland, manages the telescope. The Space Telescope Science Institute (STScI) in Baltimore, Maryland, conducts Hubble science operations. STScI is operated for NASA by the Association of Universities for Research in Astronomy in Washington, D.C.