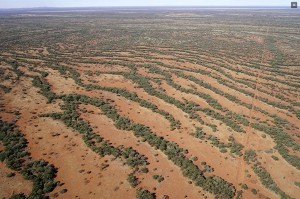 Max Rietkerk (Utrecht University), Arjen Doelman (Leiden University), Ehud Meron (Ben-Gurion University of the Negev) and Isla Myers-Smith (University of Edinburgh) received an ERC Synergy grant of 10 million euros with their project RESILIENCE. The researchers will investigate whether and how tipping points in ecosystems can be prevented or evaded by spatial processes and the formation of spatial patterns.

Tipping points occur when the damage to ecosystems crosses a threshold so that dramatic and irreversible change occurs. This damage is often a consequence of human impacts on the planet such as climate change. These tipping points are known to be a great concern in the fight against climate change. On a large scale, tipping points can cause savannahs to flip over to deserts and tundra can change to forests, resulting in even more climate change.

Earlier research published in Science last year showed that the largely overlooked tendency of stressed ecosystems to form spatial patterns, such as vegetation patterns, can significantly increase the capability of ecosystems to resist tipping and recover from damage. Rietkerk: “We will take the concept of tipping back to the drawing table and investigate the conditions for which this concept breaks down and needs to be replaced by the theory of spatial pattern formation.”

The theory proposed by the RESILIENCE team now suggests that tipping points may be prevented and circumvented by spatial patterning and its feedback with other ecological processes and that ecosystems are much more resilient than previously thought. Meyer-Smith: “Tundra ecosystems are full of spatial patterns. Stripes, circles and hexagons can be found across all different types of tundra landscapes. Whether these patterns confer resilience to climate change or not is an open question and one we aim to test in the RESILIENCE project.”

The multidisciplinary team, with researchers from Utrecht, Leiden, Be’er Sheva, and Edinburgh, will study pathways of resilience and ways of human intervention to evade these ‘points of no return’. Doelman: “With this project, we aim for discovering and constructing fundamental mechanisms that may give complex ecosystems the flexibility to respond to climate change without collapsing in a catastrophic way.”

The researchers will address this challenge by combining disciplines like ecology, physics, mathematics, computing and data science. Meron: “The high complexity of spatially extended ecosystems, reflected in part by their hierarchy of organizational levels, has hampered attempts to disentangle ecosystem response to climate change. The synergy of different expertise in our team will allow us to take advantage of that complexity and identify novel directions to evade tipping.”

The research will start in the spring of 2023 and will last for six years.