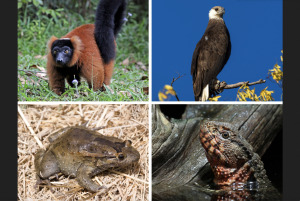 “In our age of the ‘sixth mass extinction’, our daily activities are causing hundreds and thousands of species to be lost forever. To turn the tide on the biodiversity crisis, we must identify regions and species most in need of our conservation efforts,” says lead researcher Dr. Gopal Murali, a post-doctoral student of Dr. Uri Roll’s at Ben-Gurion University of the Negev.

In a recent study Uri Roll and his colleagues focused on species with two distinct features that make especially good candidates for conservation efforts. First – they are confined to a single, very small place and therefore face a greater risk of extinction. Second – they are evolutionarily unique – they do not have close relatives on the ‘tree of life’, and their loss will represent a loss of millions of years of evolution. Species that possess both attributes are therefore of great conservation importance as they represent unique and threatened components of biodiversity.

To identify regions harboring these species (“regions of high phylogenetic endemism”), they collected data regarding the evolutionary relationships and geographic distribution of 84% of land vertebrate species (~30,000 species of amphibians, birds, mammals, and reptiles). They then mapped the global ‘hotspots’ of such species to understand the unique conditions that support them and evaluated their current protection and threats.

Dr. Roll and his colleagues found that hotspots of phylogenetic endemism mostly occur in mountainous tropical regions, and in the southern hemisphere, along mountain ranges and islands. When combining the hotspots of amphibians, mammals, reptiles, and birds, they occupy 22% of the total landmass. The Caribbean Islands, Central America, the Andes, eastern Madagascar, Sri Lanka, the southern Western Ghats in India, and New Guinea were important for all four groups. Some of these regions have been previously prioritized for conservation actions, but some are outside well-known biodiversity centers. For instance, the Asir mountains in Saudi Arabia harbor small-ranged, evolutionarily unique birds, and Morocco harbors phylogenetically endemic reptiles.

“Overall, our findings support the notion that tropical mountains have an important role in generating and maintaining biodiversity,” explains Dr. Murali.

They also quantified how human activities, and climate change, threaten these hotspots. Alarmingly, they found that buildings, roads, the conversion of natural land for urban and agriculture use, high human population density, and fast climate change are higher in these hotspots than in regions outside them.

Furthermore, they found most of the hotspots are not adequately protected. About 70% of the hotspot regions have less than 10% overlap with protected areas. Some of these regions, which require urgent conservation action, are the southern Andes, Horn of Africa, Southern Africa, and the Solomon Islands.

“Consequently, our study highlights that many uniquely rare species, which may perform distinct roles in their ecosystems, will likely be among the first to be lost due to global change,” according to the researchers, “To-date, most conservation strategies still focus on species-rich regions or flagship species, which may miss out on regions with uniquely rare species. Our study emphasizes the need for a strategic conservation policy and management to safeguard the persistence of thousands of small-ranged species that represent millions of years of unique evolutionary history.”

Dr. Uri Roll and his post-doctoral student Dr. Gopal Murali are members of the Marco and Louise Mitrani Department of Desert Ecology in the Swiss Institute for Dryland Environmental and Energy Research in the Jacob Blaustein Institutes for Desert Research on the Sde Boker campus of Ben-Gurion University of the Negev.

The research was supported by the Israel Science Foundation (ISF) (grant number 406/19).