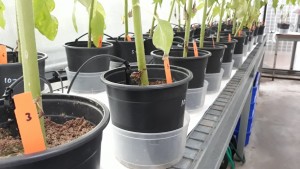 Zavit. Anyone who has seen the classic 1986 film, Little Shop of Horrors, remembers Audrey II, the talking carnivorous plant with an appetite for human blood. While the film takes creative liberties with the plant’s capabilities, the character of Audrey II is inspired by naturally occurring flora like Venus flytraps (Dionaea muscipula) and pitcher plants from the Nepenthaceae, Sarraceniaceae, and Cephalotaceae families that devour nectar-seeking insects. A parallel can even be drawn from Audrey II’s speech (albeit exaggerated for dramatic effect) to a natural phenomenon in which some plants are able to communicate with each other via chemical signaling.

But the list of unconventional abilities exhibited by plants does not end here. Presented at the 49th Annual Conference for Science and the Environment this past July, a new Israeli study has uncovered yet another surprising ecosystem service certain plants can perform: the ability to absorb and remove an unusually large amount of pollutive metals like cadmium, a common metal component in fertilizers, from contaminated soils. And oddly enough, the researchers found that these plants can purify soils even faster if the plants are tricked into thinking they are being attacked or eaten.

Both in Israel and around the world, human-caused soil contamination has become an all-too-common consequence of modern industrial and infrastructural activity. As a result of fuel refining, the use of agricultural pesticides and fertilizers, military activities, and the presence of municipal sewage and landfills, heavy metals wind up seeping into groundwater and layers of soil. This not only toxifies the environment but also puts us at risk of direct exposure via drinking water or consuming farmed produce.

“A few years ago while I was touring India, I actually saw the pollution of the environment and water sources with my own eyes,” says Eyal Grossman, graduate student and lead researcher from Tel Aviv University’s School of Environmental and Earth Sciences. After seeing the eyesore that it was and the hardship it caused, he understood just how important treating pollution is. “I had a dream to treat metal pollution by natural means,” he adds.

So, how much soil is contaminated by heavy metals? With industry, agriculture, and urbanization all on the rise, it’s difficult to put an exact, definite value on it because reports of soil pollution are being actively filed. In fact, there are more than 10 million sites of soil pollution reported around the world so far, and more than half of those sites are contaminated with heavy metals and/or metalloids. According to Grossman, an estimated 28% of the European continent’s soil is currently contaminated with one or more heavy metals in a concentration above the threshold values set by Finland’s Ministry of Environmental Protection (MoEP).

This seems to be a common environmental dilemma that extends to all semi-highly industrialized countries, including Israel. Following a land pollution survey conducted in 2014, Israel’s MoEP identified 23,100 localized areas throughout Israel that are or have the potential to become contaminated from currently or formerly active operations.

Israel’s coastal aquifer is a prime example of this. Between the gas stations, industrial plants, military bases, and landfills, the coastal plain area has become severely polluted with heavy metals over the years; so much so that by 2018, 8% of the available drinking water in the coastal plain had been contaminated, and close to 200 groundwater drilling sites (about a quarter of Israel’s drilling sites) had been shut down.

And mending the land is no small task; nor is it cheap. Between excavating, transporting, and treating the polluted soils, the cost to remediate the land in Israel alone totals approximately NIS 9.8 billion, an amount that the polluters themselves pay the vast majority. Versions of this financial burden play out in every industrialized country, incurring a cumulative worldwide economic impact surpassing $10 billion per year.

“The problem with soil-polluting metals is that they do not decompose,” says Eyal Grossman. Without proper soil treatment and treating pollution at its source, the concentration of heavy metals in the soil will remain and likely increase. However, the metals do not stay in one place within the soil, which is where the problem starts: the metals are taken up through plants and inevitably move up the food chain. In agricultural areas, for instance, hazardous metals originating from fertilizers, pesticides, irrigated wastewater, biosolids, and manure can accumulate in crops and farm animals before they make it to our plates. That is, if the metals somehow first avoid seeping into our groundwater to later contaminate the drinking water in our glasses. Either way, the environment suffers, and public health could be put in serious jeopardy, especially when it comes to lead, arsenic, or cadmium—all common metal pollutants that are particularly toxic. 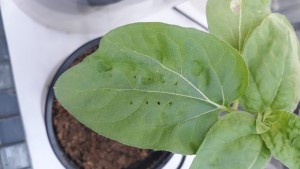 Oddly enough, the researchers found that these plants can purify soils even faster if the plants are tricked into thinking they are being attacked or eaten. Photo by Eyal Grossman

Let Nature Do Its Thing

Defined by the IARC (International Agency for Research on Cancer) as a definite carcinogen in humans, exposure to cadmium in particular can lead to health complications such as kidney damage and bone malformations. In terms of the environment, high levels of cadmium in sassafras (Sassafras tzumu), for example, impair the tree’s photosynthetic capabilities.

For the purposes of the new Israeli study, the researchers tinkered with phytoremediation, a plant-based strategy intended for reducing the bioavailability of pollutants in soil using certain plants that qualify as hyperaccumulators: plants that are hundreds or thousands of times more effective at storing particular metals and metalloids in their organic tissues than what is considered normal for most plants. Why do these plants do this?

“The most common hypothesis today is that hyperaccumulators absorb the metals into their bodies and transfer them to the leaves to keep out pests that avoid metals,” Grossman says.

To date, about 721 hyperaccumulators have been identified which include commonly known plants like the sunflower, corn, and rapeseed (from which canola oil is extracted).

“Usually, contaminated soil is removed with bulldozers and sent to a treatment facility, which costs a lot of money, or it’s simply buried elsewhere, in which case the pollution is simply transported, and the problem remains unsolved,” Grossman explains.

But with the hundreds of identified hyperaccumulator plants and the well understood process of phytoremediation, we can instead sit back and let nature “do its thing”. Based on the suspected or known metallic contaminants embedded in a particular site, certain hyperaccumulators could be planted in that area, and those plants could ideally absorb the metals into their tissues and thus improve soil fertility over time. Then, after harvesting the plants, the metals would be removed from the environment without incurring additional expenses or damaging the land itself.

What’s more is that these metal-filled plants could go on to become an important raw material rather than winding up as discarded organic waste and defeating their purpose entirely. “Many times, biofuel can be made from the contaminated plants,” says Grossman.

However, to date, the method of pollutant removal has hardly been used outside the confines of laboratories and greenhouses. Grossman points out in his study is that the main reason why this method is overlooked is because the rate of the plants’ growth is relatively slow. This means it can take several years until all the pollutants are completely eradicated from the soil, so the method is not often perceived as economically viable, especially in Israel where rapid land restoration is usually undertaken due to the pressure outpouring from real estate and infrastructure development, both of which tend to require immediate solutions.

Because of the less-than-desired time it takes to revive an area of land via phytoremediation, the researchers wondered what could possibly speed up the process to perhaps make the strategy more economically viable. The solution the researchers discovered was unusual: damage to the plant.

The researchers injected cadmium into the potted soil of 80 common sunflower plants and then caused one group of plants to “think” they were being attacked by insects. To do this, they made small perforations in the leaves with a toothpick and sprayed them with Jasmonic acid, a plant hormone. “It is produced by almost all plants when pests attack them, and it triggers the plant’s defense mechanisms,” Grossman explains.

The results of the study were more than encouraging. The amount of cadmium absorbed by the acid-sprayed and perforated group of sunflowers was 40% higher compared to the sunflower group that did not receive any special treatment. According to Grossman, this is equivalent to shortening the time required for effective phytoremediation by almost half. Plus, it should be noted that the sunflowers that received the spraying and perforation treatment did not suffer any inhibitive damage. Instead that group of treated sunflowers grew identically to the untreated group.

“We are already working on the next experiment, in which we will examine whether cadmium is also stored in the plant’s body, and not just its leaves. That is, whether the plant absorbs even more cadmium than we think,” Grossman explains.

“I call on municipalities and local councils that own contaminated land that is soon to be abandoned to cooperate with academia,” Grossman states. “It is a pity that contaminated sites will go on to harm the health of the land and the public, when you instead apply viable green rehabilitation methods and technologies, which will purify land for the benefit of us all.”

This ZAVIT Article was also published in NoCamels on 11 Oct. 2021