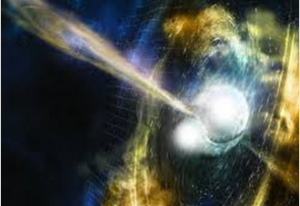 In 1989, Prof. David Eichler from BGU and his co-authors from the Hebrew University of Jerusalem, The Technion – Israel Institute of Technology, and the University of Chicago published a paper in Na​ture proposing that if two neutron stars collided, there would be a burst of gamma rays.

Such bursts had been already discovered, but no one knew what they were, and Eichler and his colleagues proposed that at least some of them came from merging neutron stars. They also proposed that the neutron rich material would be radioactive, cause an explosion, and would be rich in ultra-heavy elements such as gold and platinum, which would be ejected by the explosion.

On August 17, 2017, their predictions were confirmed when the first binary merger of two neutron stars was observed – first by the gravitational waves they produced, and then by the coincident gamma ray burst. As astronomers pointed their telescopes at the right quadrant of space, they saw the light coming from the explosion. The spectrum of the light seems to indicate that the material is rich in heavy elements, also as predicted.

Prof. Eichler has predicted for many years that gamma ray bursts from merging neutron stars, which differ in their emission properties from those that are associated with supernovae, are typically radiation that has scattered out of the primary beam by matter in its path and viewed from an angle to the beam’s axis – much like moviegoers seeing the beam of a film projector in a smoky room from the side. Yesterday, just prior to the announcement, he uploaded a paper summarizing his arguments that gamma rays bursts from merging neutron stars are actually viewed from the side  –  rather than head on  – and suggests the data collected from the August 17, 2017 collision could verify his hypothesis. The August 17 burst, which was very close yet relatively dim, is indeed being interpreted by the observers as supporting the wide viewing angle hypothesis.