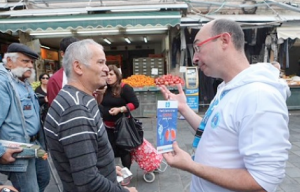 Lung specialists from Hadassah University Medical Center in Jerusalem set up a stand in the capital’s Mahaneh Yehuda market – not to sell anything, but rather to perform free tests on smokers. The aims of the test was early diagnosis of the totally preventable chronic obstructure pulmonary disease (COPD), which occurs almost exclusively in smokers, and assessment of future risk to contract the serious disease.

Prof. Neville Berkman, head of the hospital’s pulmonology institute, explained that their initiative is part of World COPD Awareness Day, which was held internationally on November 18. From 10 a.m. to 6 p.m. On the corner of Eshkol Street in the open-air market, three pulmonologists tested lung function by having people breathe into a small, disposable tube attached to a special device.

The results were available immediately. The initiative of Hadassah’s pulmonology institute, this is the first time such an event will take place in Israel. COPD is a type of obstructive lung disease characterized by chronically poor airflow, and usually gets worse over time.

The main symptoms include shortness of breath, cough and the production of sputum; most people with chronic bronchitis have COPD. Tobacco smoking is the most common cause of COPD, with air pollution and genetics playing a much smaller role. In the Third World, one of the common sources of air pollution that can cause COPD is poorly vented cooking and heating fires.

The obstruction of air in the lungs causes respiratory difficulties, including the exchange of gases in the lungs. Early diagnosis of such obstructions, said Berkman, can prevent the disease and its many complications. “It takes only a few minutes to undergo the test and receive the assessment,” he said. “We will provide a valuable service to the public.”

Meanwhile, the United Hatzalah voluntary organization has launched a national life-saving campaign of free first-aid courses for parents who want to know how to treat their children in an emergency. The basic “Safe Family” courses will be held at dozens of sites around the country.

The lessons, focusing on what to do during the critical first minutes in an emergency, increase the chances that the child will survive. The topics include resuscitation of infants, children and adults; saving people who inhaled a foreign object; and coping with fever and convulsions due to fever in infants and children. The four-hour course is valuable for school and kindergarten employees as well. More information can be obtained by calling 052- 7616777.

Avraham Kfir, CEO of the Reckitt Benckiser-Israel pharmaceutical company that is sponsoring the project, said his company decided to take part to save the lives of children, including those who are in danger from fever convulsions.