Greywater Reuse for Irrigation Is Safe and Does Not Cause Gastrointestinal Illness, According to BGU Research Study 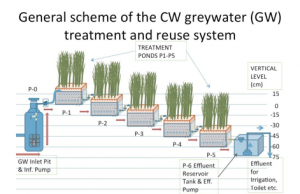 Researchers at The Zuckerberg Institute for Water Research at BGU have determined that treated greywater is safe for irrigation and does not pose a risk for gastrointestinal illness or water-related diseases.

This study determined that there was no additional incidence of gastroenteritis or water-related diseases caused by use of treated greywater in gardens, even when compared to tap water and other irrigation water sources.

Greywater includes any wastewater generated in households or office buildings except for toilet wastewater. According to the researchers, “There is a growing interest in greywater reuse from sinks, bathtubs and laundry machines, particularly in water-scarce regions. New greywater systems, including one developed at the Zuckerberg Institute, now make reuse economically feasible on both a national and household scale, provided it is handled responsibly to eliminate potential environmental and health risks.”

Study participants — greywater users and the non-greywater-using control group — were required to complete a weekly health questionnaire for a year, as well as a preliminary lifestyle questionnaire to assess their exposure level to greywater or potable water used in garden irrigation.

“This study showed that there was no additional incidence of gastroenteritis found among treated greywater users and practically no difference in the prevalence of water-related diseases between greywater and potable water users,” explains BGU Zuckerberg Institute Prof. Amit Gross, “In fact, the rate of illnesses was found to be lower with the treated greywater than from the control group at times, suggesting that the main exposure to gastrointestinal disease-causing bacteria is likely not from exposure to pathogens in greywater.”

The second study component compared the findings to published results of health risks determined by Quantitative Microbial Risk Assessment (QMRA), a standard process used for measuring the risks from exposure to known microbial pathogens or indicators in water or food sources. “Since the concentration of pathogens in the current study was higher than QMRA risk levels, yet the prevalence of water-related diseases between control and greywater users was similar, we believe that QMRA can be used as a conservative benchmark toward establishing regulations governing greywater reuse,” Gross says.

Following this initial study, Prof. Gross recommends further research involving a larger population to enhance the statistical power of and enable elaboration on the possible connections between gastrointestinal illnesses and exposure to greywater.

Epidemiological Study for the Assessment of Health Risks Associated with Greywater Reuse for Irrigation in Arid Regions research funding was provided by the Rosenzweig–Coopersmith Foundation (RCF) and Zuck Macabi Foundation.

Publication in Science of the Total Environment (Elsevier)