A First in Israel: Cardiac Catheterization at Hadassah on 860-Gram Baby 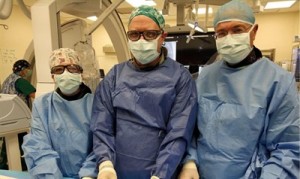 For the first time in Israel, a cardiac catheterization was successfully performed this week at Hadassah Hospital Ein Kerem on a fragile, premature infant weighing just under two pounds (860 grams).

Born four weeks ago together with her twin sister at Hadassah Hospital Mount Scopus, the tiny girl, weighing one pound, was delivered in the 26th week of pregnancy. When she gained a quarter pound, the procedure was scheduled.
She underwent a catheterization to close a central blood vessel. The large team was led by cardiologists Sagui Gavri, Nurit Yaakobi, and Gur Mainzer, as well as neonatologist Noa Ofek and anesthesiologist Shelly Stohl.

The baby’s condition is called PDA, patent ductus arteriosus, which means that the baby is born with an unclosed hole in the aorta. Before birth, blood doesn’t have to go to the lungs to be oxygenated. It goes through a hole that allows the blood to skip the circulation to the lungs. After birth, in a healthy heart, the blood must receive oxygen in the lungs, and the hole closes in the first few days after birth. Failure of the ductus to close is common in premature infants but rare in full-term babies.

Normally, the heart’s left side pumps blood only to the body, and the right side pumps blood only to the lungs. In a baby with PDA, extra blood gets pumped from the body artery (aorta) into the lung (pulmonary) arteries. This makes the heart and lungs work harder, and the lungs become congested. Catheters are used to close the PDA, but until now, this had never been done with such a premature baby in Israel.

Dr. Yaakobi said the team has been acquiring the needed expertise at different hospitals and conferences around the world to be ready for the day when they would have to save a tiny premature baby with this heart defect.

“The catheterization was a breakthrough for our team, now allowing us in Israel to treat tiny premature babies who suffer from this problem, saving them from surgery,” said Dr. Mainzer.