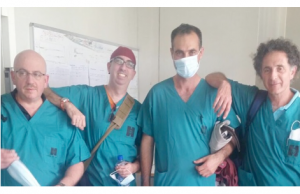 For eleven-year-old Nazria and 16-year-old Fano, the doctors and nurses from the Hadassah Medical Center who flew in to Ethiopia from Jerusalem are their last hope.

Day 1. Both have been brought to the Ayder Comprehensive Specialized Hospital in Mekelle, hundreds of miles from their farming villages. Nazria’s frail frame reveals a back twisted into the letter s. Displaying a shy toothy smile, she shows the doctors she can walk. The middle child of five, she nearly died last year from pneumonia, which was exacerbated by her spine malformations. Fano, the youngest of eight children and very handsome, is the only one of his siblings to be born with a back full of hills where plains should be. The doctors examine this boy and girl as well as other patients on a wooden bench in a waiting room open to the hospital courtyard in the crowded hospital.

This March 19th-23rd medical outreach by Hadassah to Ethiopia, entitled Hadassah’s Scoliosis Surgery and Education Campaign, is the first mission to Ethiopia to undertake complex spine surgery. Ethiopia has very few spine surgeons and most of them deal with trauma, not pediatric congenital diseases. Mekelle, located in the center of Ethiopia’s northern Tigray region, is home to the Ayder regional hospital that services some eight million people.

Ties have existed over the last decade between Hadassah and Mekelle University, which includes schools of medicine, nursing, pharmacy, and public health. Expert in Infectious Diseases Prof. Alon Moses has been involved in joint investigative studies with Mekelle, and four Hadassah medical students do a rotation there every year.

Mekelle physicians and nurses were among those professionals who took part in the successful “Train the Trainer” program, led by Hadassah Hospital to combat HIV AIDS. Additional contacts initiated by Hadassah Spine Surgeon Dr. Josh Schroeder, coupled with donations, have brought the dream of the scoliosis surgical campaign to reality. “Somewhere in my mind,” says Dr. Schroeder, I have always felt we need to share our expertise with the neediest populations. When I was an intern, I volunteered in Africa. Now, as a trained surgeon, I have more to give.”

Reuven Gelfond, who was a leader in Israel’s aid missions to Haiti and the Philippines, took on the role of preparing and organizing the operating room, as well as bringing critical equipment. Deputy head of Hadassah Hospital Mount Scopus’s recovery room, Tsheay (Orna) Tadoses-Solomon, who was born in Ethiopia and speaks Amharic, will head post-operative care. Hadassah Hospital Ein Kerem Operating Room Nurse Ammar Farhat will work with Mr. Gelfond and the surgeons. Amir Maymon Shapira, a Hadassah nurse who is now Vice President of Medtronics, a medical supply company that contributed equipment to the mission, and Sagi Gudes, a neurophysiologist, will monitor the surgeries.