Weizmann (Israel) shows how does the human microbiome grows 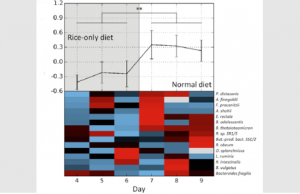 Bacterial growth rates computed with the new method (top, average; bottom, for specific species, red represents faster replication) for a human subject that underwent a radical dietary change. Compared are days in which only white boiled rice was consumed (grey area) and days of normal diet (white area). A global change in bacterial growth dynamics was observed between dietary regimens

It is increasingly clear that the thousands of different bacteria living in our intestinal tract – our microbiome – have a major impact on our health. But the details of the microbiome’s effects are still fairly murky.  A Weizmann Institute study that recently appeared in Science suggests approaching this topic from a new angle: Assess how fast the various bacteria grow. This approach is already revealing intriguing links between bacterial growth rates and such conditions as type II diabetes and inflammatory bowel disease. The new computational method can illuminate a dynamic process such as growth from a static “snapshot” of a single sample, and thus it may have implications for both diagnostics and new avenues of research.
Tal Korem and David Zeevi, research students in the lab of Prof. Eran Segal of the Computer Science and Applied Mathematics Department, led this research and collaborated with Jotham Suez, a research student in the lab of Dr. Eran Elinav in the Immunology Department, and Dr. Adina Weinberger, a research associate in Segal’s lab. The study began with the advanced genomic sequencing techniques used in many current microbiome studies, which sequence all of the bacterial DNA in a sample. From the short sequences, they construct a picture of the types of bacteria and their relative abundance. But the Weizmann Institute team realized that this sequencing technique held another type of information.
“The sample’s bacteria are doing what bacteria do best: making copies of their genomes so they can divide,” says Segal. “So most of the bacterial cells contain more than one genome – a genome and a half, for example, or a genome and three quarters.” Since most bacterial strains have pre-programmed “start” and “finish” codes, the team was able to identify the “start” point as the short sequence that was most prevalent in the sample. The least prevalent, at the other end of the genome, was the DNA that gets copied last. The researchers found that analyzing the relative amounts of starting DNA and ending DNA could be translated into the growth rate for each strain of bacteria.

The group tested this formulation experimentally, first in single-strain cultures for which the growth rate could be controlled and observed, then in multiple animal model systems, and finally in the DNA sequences of human microbiomes, in their full complexity. Their method worked even better than expected: The estimated bacterial growth rates turned out to be nearly identical to observed growth rates. “Now we can finally say something about how the dynamics of our microbiome are associated with a propensity to disease. Microbial growth rate reveals things about our health that cannot be seen with any other analysis method,” says Elinav.

In their examination of human microbiome data, for example, the group found that particular changes in bacterial growth rates are uniquely associated with type II diabetes; others are tied to inflammatory bowel disease. These associations were not observed in the static microbiome “population” studies. Thus the method could be used in the future as a diagnostic tool to detect disease or pathogen infection early on, or to determine the effects of probiotic or antibiotic treatment. In addition, the scientists hope this new understanding of the microbiome will spur further research into the connections between the complex, dynamic ecosystem inside of us and our health.
Also participating in this research were Tali Avnit-Sagi, Maya Pompan-Lotan, Nadav Cohen and Elad Matot in Segal’s lab; Christoph A. Thaiss and Dr. Meirav Pevsner-Fischer in Elinav’s lab; Dr. Ghil Jona and Prof. Alon Harmelin of the Weizmann Institute; Dr. Alexandra Sirota-Madi and Prof. Ramnik Xavier of Harvard Medical School and the Broad Institute; and Prof. Rotem Sorek of the Weizmann Institute.
Publication in PNAS, September 4th 2015