Haifa U. and Weizmann: The First Atlas for the Cell of Stony (Skeleton-Building) Corals 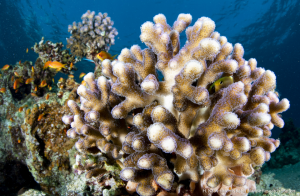 A joint study by the University of Haifa, the Centre for Genomic Regulation (Barcelona), and the Weizmann Institute have managed to sequence – for the first time – the genetic program of each cell type in stony corals. This allows researchers to understand exactly which cells take part in key processes in the coral’s development, such as skeleton formation, the immune system, and so forth. “Coral reefs play a critical role in the ecosystem in oceans and seas, since they provide a habitat for around 25% of the animals in the sea and build the largest biogenic structures in the world.

The warming of seawater and rising acidity pose a threat to the future of coral reefs, and accordingly,the genetic sequencing we have completed is extremely important for the survival of coral reefs and the future of the oceans,” explains Dr Tali Mass (one of the author of the study).  Dr Mass heads the Coral Biomineralization and Physiology Laboratory within the Leon H. Charney School of Marine Sciences at the University of Haifa.

“Despite its great ecological importance, very little is known about the genetic profile of each cell in coral. Understanding the cellular structure will help us to understand the biological processes that permit the existence of the coral reef,” emphasizes Dr Shani Levy of the University of Haifa, the postdoctoral researcher who led the study.

Coral reefs perform many functions that are also important to humans. In many areas they serve as a tourist attraction; they help to preserve the coastline and serve as a natural breakwater; in recent years they have become a fertile source for the pharmaceutical industry. However, their most important function is to serve as the “rainforests” of the sea – the primary foundation of the ecosystem and their symbiotic relations with a particular type of algae enable coral reefs to be the main source of photosynthesis in the sea. “The size of the coral reefs puts the photosynthetic process on a similar scale to that of the rainforests, accordingly serious damage to the reefs is analogous to the uncontrolled decline in rainforests”, the researchers explained. However, the rising sea temperatures due to global warming and rising acidity in seawater, a process known as ocean acidification, poses a threat to the survival of coral reefs, and hence a danger to the equilibrium of the diverse ecosystems that depend on these reefs.

According to the researchers, corals are exceptional living beings. They begin life as planktonic larva that “swims” with the currents of the sea. At a certain point, when it finds a suitable place to settle, it becomes immobile and rapidly starts to form its calcium-carbonate skeleton, which is the foundation of coral reefs. In the current study, attempted to identify the gene expression program of the different cell types in the stony coral Stylophora pistillata (hood coral also known as the smooth cauliflower coral), a wide-spread coral that is very common in tropical reefs around the world. This study was a collaboration of Dr Mass from the Leon H. Charney School of Marine Sciences at the University of Haifa, together with DrArnau Sebé-Pedrós from the Centre for Genomic Regulation in Barcelona and Prof. Amos Tanay from the Weizmann Institute. 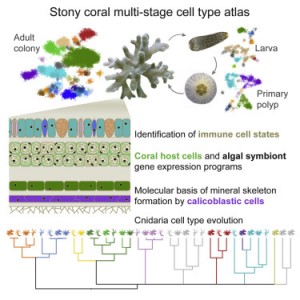 The researchers used innovative methods to measure the gene expression of each individual cell (single-cell RNA sequencing), and they were successful in sequencing tens of thousands of cells in this manner. After processing and analyzing their findings, they were able to identify around 40 cell types in the coral over its lifespan – from the larval mobile stage through its existence as an immobile creature. The researchers were able to identify, for the first time, the molecular mechanisms responsible for the basic processes that allow the existence of the coral, such asskeleton formation, the symbiosis between the algae and the host, the immune and digestive systems of coral, and so forth. Their sequencing essentially enabled the researchers to identify which genes participate in each process. By way of example, they identified about 800 genes that are expressed in the cells thatresponsible for skeleton formation, including carbon transporters and acidic genes identified by Dr Mass in the past that are key functions in building the skeleton. The researchers also found that transcription factors, such as IRF and NFAT, and receptors characteristic to the immune system of corals, are similar to those found in the immune system of mammals.

By means of comparison between the expression program of the coral cells and those of other cnidarians (sea-anemones, soft corals, jellyfishes, etc.), the researchers also managed to decipher the common evolutionary history of each cell type.

Given the great significance of the future of the coral reefs, it is difficult to overstate the importance of this new genetic atlas. Just as this innovative single-cell sequencing method enables scientists all over the world to better understand the function of specific genes in cancer cells or in mammals brain cells, it will enable the researchers  to understand which cells and genes are responsible for the different functions in coral and it will open the door to new possibilities in coral “medicine.” “Thanks to the new information, we will be able to undertake much more focused experiments. We will be able to examine, at the genetic level,why some corals are more resistant to changes in temperature than others. We will be able to undertake focused experiments relating the ability of corals to become resistant to rising acidity in the water. In addition, we are able to study whether it is possible to modify coral genes in order to make them more resistant – and many other possibilities,” the researchers explained.

They added that given the fact that coral’s damage and decline can have a disastrous and devastating impact on the ecosystem, and hence on the entire planet, they have also developed an application that provides other researchers with easy access to information so that they can examine, via a simple process,which genes participate in any given process. “We believe that our findings will be a milestone in the entire field of coral research and coral reefs conservations” the researchers summarized.