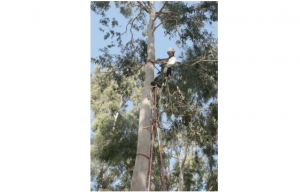 A new terrestrial survey based on NASA satellite photos has identified the tallest trees in Israel. Which trees are they, where can they be seen, and how will they fare in a harsher climate?

Zavit. When you find the recreational time to walk on a trail through a forest, it can be breathtaking to look upwards to the top of a towering tree and feel so small by comparison. In fact, trees hold some of the most impressive records in the natural world with regard to their age and their height. And just like many natural and ecological marvels, a threat to highly valued and especially record-setting trees creates a cause for concern as they are typically viewed as a unique mark of environmental pride.

This has been the case in the recently developing wildfires which have scorched more than 2 million acres (9,195 square kilometers/3,550 square miles) across California so far. Last year alone, fires were estimated to have alarmingly killed between 7,500 to 10,600 large redwoods (Sequoiadendron giganteum); old-growth groves of which can capture up ten times more atmospheric carbon dioxide per hectare than non-redwood forests, according to the UK-based Sequoia Project.

Reoccurring fires like these have already destroyed hundreds of homes, countless trees, and endangered other ecologically significant trees in California’s Redwood National Forest like Hyperion, a coastal redwood (Sequoia sempervirens) that happens to be the tallest tree in the world standing at 115.6 meters (approx. 379 feet). This means, it’s taller than the Statue of Liberty and the Big Ben Clock.

But what about Israel’s tallest trees? How safe are they? Using data collected by NASA, JNF (Jewish National Fund) published a new national survey in its Forest magazine, which identified the tallest trees in Israel and their concerning climate sensitivity heading into the future.

Water is a Must

Eucalyptus trees in the Hula Reserve. Photo by Hilla Gil-Klein.

The survey found eucalyptus trees growing in the Hula Valley to be the tallest trees in Israel reaching heights just over 50 meters, and one natural process in particular is responsible for the growth spurts of this scale.

“When water evaporates from the leaf into the air, a vacuum is created in the tree’s transport pipe (its xylem), causing water to permeate its roots,” explains Dr. Tamir Klein of the Department of Plant and Environmental Sciences at the Weizmann Institute of Science. In other words, transpiration influences the tree’s uptake of water. “It’s similar to the way our mouths create a vacuum when we drink from a straw.”

According to Klein, the taller the tree, the stronger the tree absorbs water through its roots—but to a point. However, water operating under such a high rate of transpiration actually becomes unstable, creating bubbles of gas that wind up blocking the passage of water though the xylem. But when the percentage of water in the soil is higher, a lower transpiration is needed to pump it up the tree. So, according to the hydraulic limitation hypothesis, the greater the water availability, the higher a tree can typically grow.

“The survey conducted in Israel is the result of a journey that began a decade ago,” says Klein, who led the study in collaboration with Dr. Michael Sprintsin and Aylon Kalev of the JNF. He says that in 2011, NASA launched a satellite that aimed to measure the thickness of the ice layers at the poles, however, NASA realized that it could also be used to map the heights of the world’s forest canopies.

“I contacted them back in 2011, and eventually, in 2015, I worked with the map they produced, alongside colleagues from Switzerland.” Klein and his colleagues used NASA’s data as well as estimates of the amount of water in various places on Earth to test the theory of hydraulic limitation on tree height. “We found a complete match between average tree height and soil water availability––findings that support the theory.”

Brutia pine in the Bar’am forest. Photo by Hilla Gil-Klein.

“We went on a tour of the higher density forest plots that were identified to contain the tallest trees, as well as low density areas that we knew from experience exhibited tall trees, and measured the tallest trees using a laser rangefinder,” he says. Because, the NASA satellite quantifies the average tree height of a particular area, tall trees in low density areas were not necessarily detected, so Klein’s geographic expertise came in handy. Plots with trees taller than 20 meters were detected by the satellite in only three main areas, all characterized by a rainier climate: the Carmel mountain range and Ramat Menashe district, the Upper Galilee including Meron and the Western Galilee, and Mount Hermon.

The tallest tree found in the survey, and hence, the tallest tree identified in Israel, is a 51.2-meter (approx. 168 feet) river red gum (Eucalyptus camaldulensis) growing in the Hula Valley north of the Kinneret. This is a variety of Eucalyptus that was originally endemic to Australia before being imported to Israel in 1884 to drain swamps and local wetlands as a way to manage mosquito populations and restrict the spread of malaria, which was heavily plaguing Europe at the time.

According to the researchers, the unusual height of this tree and those in its vicinity can be explained by a number of factors. Normally recorded around 30 meters (approx. 98 feet), the species has been known to reach relatively similar heights of 45 meters (approx. 147 feet). Secondly, the Hula Valley is characterized by a high degree of soil fertility, storing adequate amounts of water even in summertime. Plus, the trees’ canopies are partly particularly dense, so they can easily compete for light allowing them to grow quite dominantly. Lastly, this and other Eucalyptus varieties are among the oldest planted trees in Israel enabling them to reach the heights recorded by Klein.

With regard to the trees amongst Israel’s local species, a common cypress (Cupressus sempervirens) growing along Nahal Hashofet (River of the Judge) in Ramat Menashe was found to be the tallest in the survey standing at 43.6 meters (approx. 143 feet).

“Almost all the tall trees we found in Israel grow near a stream or a body of water. Without such a supply of water, it is difficult for trees to grow tall under the arid conditions that exist in the country,” states Klein.

In addition to the high eucalyptus plot in the Hula Valley located near the reserve gate, Klein recommends those who want to see tall and impressive trees to visit Nahal Kziv where plane trees (Platanus orientalis) grow up to 25 meters tall (approx. 82 feet), or walk through the Biriya Forest near Safed where pine trees tower over 30 meters tall (approx. 98 feet).

The Plight of Mature Trees

According to Klein, the survey findings show that the heights of trees in Israeli forests are faring well compared to those growing in other forests throughout the world that experience similar weather conditions.

“The trees in the forests of the country are usually taller than the world average of forests in a similar climate, which is encouraging because it means that the trees are growing under good enough conditions to reach their full potential,” he explains.

At the same time however, it is not entirely clear whether or not Israel’s tall trees will continue to prosper due to their greater sensitivity to arid conditions than shorter trees. As a result of the growing global climate crisis, the projected rise in Israel’s temperatures may very well cause tall trees to dry out and render new trees incapable of growing to the same heights. In addition, tens of thousands of mature trees are cut down and felled in Israel each year for mainly construction and development purposes.

According to a report from the Knesset’s Research and Information Center, around 40,000 felling licenses were issued between 2013 and 2018 which permitted the felling of approximately 376,000 total trees and a little more than half were cut down for reasons pertaining to construction and development. Regardless of whether cutting down trees in quantities of this size is justified, it certainly creates a domino effect of consequences with respect to the climate. Mature trees provide a considerably greater degree of ecosystem services needed to reduce and thwart global warming than their younger counterparts.

“At the moment, the vegetation in Israel has not yet reached its peak,” says Klein. “Trees are life-sustaining organisms that need hundreds of years to fulfill their potential while we, in the human world, are changing everything around us very quickly and erasing entire forests in the blink of an eye.”

“Do we only want to see concrete buildings around us, or are we also interested in forests and tall trees? Looking to the future, this is something we really need to think about as people of this Earth,” he concludes.

The tallest eucalyptus in the Hula Reserve, Israel. Photo by Hilla Gil-Klein.