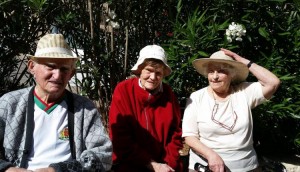 Picture : Beit Ebenezer one for israel

With the spread of Covid-19 across Israel, the University’s Dean of Students enlists volunteers to staff helpline for Haifa’s elderly so they can feel less alone.

As Israel grapples with its second lockdown this year in the hopes of combating the spread of Covid-19, University of Haifa is launching a student-led initiative to aid the city’s elderly population.

University of Haifa students, Tamar Nagler and Liat Epstein – who were inspired by the events that transpired in the first lockdown – decided to band together and mobilize a team of students who will supervise volunteers to help make the city’s elderly population feel a little less isolated.

“During the first lockdown of Coronavirus in Haifa we started thinking about the elderly that were suddenly dependent on other people and weren’t able to take care of basic needs,” Nagler, a third-year nursing student explained. “Suddenly, this population of the city was cut off from their loved ones and their community and were faced with no social outlet.”

“They just needed someone to talk to, even over the phone. This is true not only during lockdown, but the whole year,” Epstein, a third-year student of the school’s Department of Occupational Therapy added.

After a successful volunteer-led program in March, the students joined forces with the University’s Dean of Students and the welfare department of the city’s municipality to make the program official.

The University will kick off the 2020/1 academic year by launching a pilot project that will train students to serve as neighborhood coordinators who will work with municipal caseworkers across the city ensuring full coverage of Haifa – Israel’s third-largest metropolitan city and the second-largest population of elderly citizens. After a selective application process, the student coordinators accepted into the program received the University’s new “Keeping In Touch” 6,000 NIS scholarship for completing 80 hours of volunteer service.

“In addition to helping senior citizens, this project also advances cooperation between academia, university, and municipality authorities so it’s a win all around,” Nagler said.

Each student volunteer will be trained by the Dean of Students department and will work closely with a social worker in order to spot any problematic red flags that may pop up during the volunteer’s efforts. Moreover, because each volunteer is designated a specific senior citizen to speak to, they are able to build a relationship with that person over time. Upon the project’s completion this year, it is expected that students will aid some 60 senior citizens across the city.

Currently, because of Covid restrictions, volunteer interaction will be conducted over the phone but Epstein and Nagler hope more face-to-face contact will be possible sometime in the future.

“I was personally very angry about the first lockdown,” Nagler confessed. “The elderly were stripped of their independence. Self-isolation should be their decision. From a human rights perspective, we know how seriously and rapidly a person can deteriorate during a lockdown.”

“We obviously can’t say they’re safe to go out, but staying indoors does harm as well. This project, then, is a good compromise. It enables them to still be in touch with the community,” Epstein added.

“We’re very proud of these University of Haifa students for spearheading such an important initiative and showcasing the importance of contributing to our community,” Lisa Silverman, interim CEO of the American Society of the University of Haifa, said. “Extending a helping hand to others around us is a founding principle of the school and, as such, sets an excellent example of our desire to enhance our community outreach efforts.”