Haifa and TAU U. Employ Hubble Telescope to Investigate Blackholes 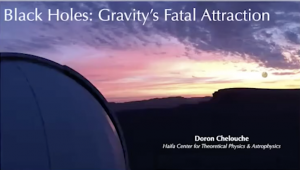 Prof. Doron Chelouche at the Department of Physics and the Haifa Center for Theoretical Physics and Astrophysics at University of Haifa: “This will be among the most accurate and extensive mapping campaigns of the immediate environs of active supermassive black holes to date.”

Haifa, Israel, December 23, 2021 — University of Haifa will make use of the world-renowned Hubble Telescope and lead an international space – and ground – observational campaign to map out the vicinity of black holes to better understand how they accrete material and grow over cosmic time.

The University is conducting its research alongside Princeton University, University of Göttingen, Ruhr-University Bochum, and Tel Aviv University.

“This discovery will be among the most accurate and extensive mapping of the immediate environs of active supermassive black holes to date,” said lead researcher Prof. Doron Chelouche, professor at the Department of Physics and the Haifa Center for Theoretical Physics and Astrophysics at University of Haifa.

Hundreds of research groups apply to use the Hubble Space Telescope each year since it is one of the few pieces of equipment that can delve into the depths of space in such a precise and advanced manner. However, only some 10% of the time requested is approved and granted precious access to the telescope’s capabilities.

Prof. Chelouche’s research team will examine – for the first time with high-resolution – ultraviolet, optical, and infrared radiation from the environs of the supermassive black hole in the MRK 279 galaxy, which is several hundred million of light-years away from Earth. This black hole is active, which means that it is seen to be accreting material from its environment, and rapidly growing.

According to NASA, a black hole is a “region in space where the pulling force of gravity is so strong that light is not able to escape.” The strong gravity occurs because matter has collapsed into a tiny space. This process takes place at the end of a star’s life. Some black holes are a result of dying stars, and yet the formation path for supermassive black holes, which are harbored at the centers of most if not all massive galaxies in the universe, is currently uncertain.

According to prevailing models, every active black hole that rapidly accretes material from its surrounding environment is surrounded by an “accretion disk” which consists of high-temperature gas that rotates incredibly fast and emits strong light. Understanding these disks can potentially unlock key questions about black hole formation and evolution over cosmic time. Specifically, it can tell us how fast black holes grow, and how they affect the galaxies in which they reside.

“During the accretion process, gas heats up to high temperatures and its properties can be measured. Using Hubble Space Telescope’s abilities to provide accurate measurements at the ultraviolet, optical, and infrared sections of the electromagnetic spectrum, we can get a more precise understanding of the immediate vicinity of the black hole. The Hubble Space Telescope is currently the only device that has the appropriate spectral coverage and resolution to allow such a study,” Prof. Chelouche added.

This project follows an earlier study conducted by Prof. Chelouche where he examined the accretion disk in MRK 279 using ground observations and found tantalizing evidence suggesting that current models for the structure of the innermost regions of active black holes at the centers of galaxies are highly incomplete. In this current study, however, researchers hope to focus on material which is located even closer to the event horizon of the black hole that could yield a more accurate picture of the accretion disk’s behavior and shed light on the fate of the accreted material.

Prof. Chelouche believes the experiment is not only valuable from a basic science perspective and its desire to understand how the universe operates, but predicts that knowing more about how black holes interact with their large-scale environment could teach us about how galaxies, like our Milky Way galaxy, form and how the necessary conditions for the emergence of life in the universe may be sustained.

“This is the beauty of basic science in general, and of astronomy, in particular,” says Prof. Chelouche, “It drives supportive technological innovation across many disciplines and platforms and may herald a revolution in our understanding of our place in the universe and its governing laws, not unlike quantum physics, which started off as basic science and is nowadays at the operational core of our digital world.”

University of Haifa is a world-class university dedicated to academic excellence and social responsibility. The University expands educational opportunities and upward mobility for all members of society secures and stabilizes the north of the country, and serves as an example of tolerance and coexistence in Israel and the entire region.