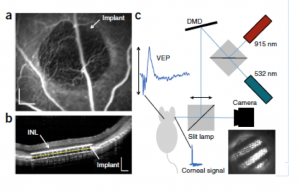 A paper published on April 27th 2015 in Nature Medicine describes a novel retinal implant.  The new technology, which is based on photodiode activation of the retina, results in an implant that could restore vision in a resolution five-times better than existing devices.

As a clinical ophthalmologist, Dr. Yossi Mandel is an expert in the diagnosis, treatment and prevention of diseases that can lead to blindness.  But as an experimental researcher with a PhD in bio-engineering, he also sees things from a different, technological angle.

Along with the other researchers, Mandel developed a model for measuring visual acuity in rats during his post-doctoral research at Stanford. “Since the rat cannot easily indicate if it sees the stimuli, we evaluated visual acuity using an approached which is routinely employed for young children or non verbal patients.” In this method, the clinician records brain activity in response to visual stimuli at various sizes.

“Retinal degenerative diseases destroy photoreceptors – the rods and cones that respond to light – but other parts of the eye usually remain healthy,” says Mandel, today a Senior Lecturer in Bar-Ilan’s Mina and Everard Goodman Faculty of Life Sciences and Head of the University’s Ophthalmic Science and Engineering Laboratory. “The retinal implant – a 30-micrometer-thin, photovoltaic pixel array implanted beneath the retina – converts incoming infra-red light into electric current.  This current stimulates the retinal neurons that remain functional, allowing them to send messages to the visual center of the brain.”  Electrical measurement of neural activity in the visual cortex showed that the response evoked by this electrical stimulation resembles what occurs during normal vision.

The new implant represents a major improvement in “prosthetic” vision devices that may someday restore functional vision to patients suffering from degenerative diseases of the retina. Clinical trials, which will focus on patients blinded by a genetic disease called retinitis pigmentosa, are scheduled to begin in France next year.

According to Mandel, previous retinal prostheses have been successful in restoring limited vision, even in humans.  However, the current technology represents a breakthrough in the restoration of high visual acuity. The small pixel size of the photovoltaic array – with each pixel measuring just 70 microns across – allows for the highly localized stimulation that, in turn, results in an unprecedented level of visual acuity.  “While existing systems achieve visual acuity up to about 20/1200, the current implant achieves correction to 20/250 – still a long way from perfect, ‘20/20’ vision, but a major improvement nonetheless,” Mandel says. “This is a level of acuity that would allow blind patients to make out the shape of objects and to see meaningful images.”

The new implant has another advantage over previous technologies – its potential for use in minimally-invasive vision therapy. “Other prostheses are powered by extraocular devices which are wired to a retinal electrode array, and they require complex surgeries,” Mandel says. “The current technology, on the other hand, is wireless, with light transmitted by special glasses stimulating the photovoltaic pixels positioned under the retina. While a sophisticated approach, for the patient, our system is far less complicated.”

Dr. Mandel is one of the founding directors of Bar-Ilan University’s soon-to-be-launched graduate program in Visual Science.  This study track – which will be unique in Israel – links BIU’s existing program in clinical optometry with experimental researchers working in photonics, visual neuroscience and bio-engineering.  With 250 BIU students currently pursuing interdisciplinary vision studies at the graduate level, the University is currently recruiting Masters and Doctoral candidates to join the program, which will open next year.