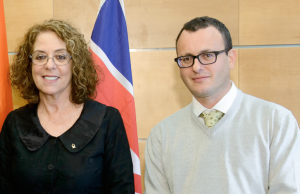 Buckingham Palace announced that Professor Rivka Carmi, President of Ben-Gurion University of the Negev, is to receive a rare honour from the Queen. Prof. Carmi will receive an appointment of an honorary Commander of the Order of the British Empire (CBE), for her work to deepen scientific and academic relations between the UK and Israel.

Prof. Carmi, the first woman to serve as president of an Israeli university, has played a vital role in strengthening scientific collaboration between the UK and Israel, as the founding co-chair of the UK Israel Science Council since its inception in 2010. Under her leadership, the Science Council promotes joint academic work, such as cutting-edge stem cell research to tackle some of the world’s most dreadful diseases. This council includes professors of other israeli universities and institutes : Weizmann Institute of sciences (Profs Benny Geiger et Ruth Arnon), Haifa University (Pr Gal Richter Levin), Technion (Pr Aaron Ciechanover), Hebrew University of Jerusalem (Pr Hermona Soreq), and Tel Aviv University (Profs Ehud Gazit et Yossi Shiloh).

Prof. Carmi said in response to receiving the award: “I am thrilled to accept this honour which recognizes the increasing links between the UK and Israel, especially in science. The UK Israel Science council, set up at the behest of Ambassador Gould, has been a flagship initiative, demonstrating the great potential for collaboration between our two countries. We are committed to improving the health of all nations and sharing our scientific discoveries.”

Commenting on the award, British Ambassador to Israel Matthew Gould said:
“I am delighted that Her Majesty has chosen to honour Rivka with this award. Rivka is an inspiration, to me and many others. Her leadership and commitment to strengthen science collaboration between our countries has made a huge difference. Israel is lucky to have her as a leader; Britain is lucky to have her as a friend.”

The past few months have witnessed a sharp increase in scientific collaboration, further engaging British and Israeli researchers. These include the second round of projects of the BIRAX joint medical research initiative, launch of several student exchange programmes and scholarships in top universities such as Oxford and Cambridge, and a unique cooperation agreement between the UK’s prestigious Royal Society and the Israeli Academy of Sciences and Humanities.

Members of the UK-Israel Science council: