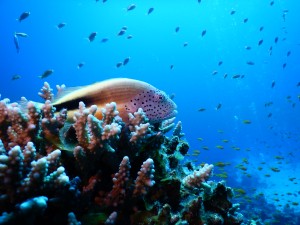 Coral reefs are one of the most biologically diverse ecosystems on earth. In the northern Red Sea and Gulf of Aqaba corals also have exceptionally high tolerance to increasing seawater temperatures, now occurring as a consequence of global warming. This characteristic led coral reef scientists to designate this region as a potential coral reef refuge in the face of climate change – a reef where corals may survive longer than others that are being lost at an alarming rate due to human pressures.

However, global climate change will also result in more variable weather patterns, including extreme cold periods. Some researchers predict that the Red Sea region is entering a cooling phase. Therefore, researchers from Bar-Ilan University and Interuniversity Institute for Marine Science in Eilat conducted an experiment to investigate the effect of an unusually cold winter on corals from the Gulf of Aqaba.

Researchers demonstrate that a winter even 1°C cooler than average results in a physiological stress response similar to that seen in other corals under heat stress. This result shows for the first time how perilously close Gulf of Aqaba corals live to their lower temperature threshold.

Previous studies conducted within the research group of Prof. Maoz Fine, of Bar-Ilan University’s Mina and Everard Goodman Faculty of Life Sciences, have used controlled experiments in the Red Sea Simulator System to expose locally abundant corals to increased seawater temperatures expected to occur within and beyond this century. Multiple experiments found that corals from this region have an extraordinary tolerance to high temperatures, which kill corals elsewhere in the world. Prof. Fine’s lab and researchers from other groups have tested multiple coral species and at different phases of their life cycle including the reproductive and larval phases, which are typically more sensitive to environmental change; all show similar tolerance.

“Whilst we have repeatedly demonstrated the high temperature tolerance of corals on the shallow reefs in Eilat, we wanted to test the possibility that this exceptional heat tolerance comes with the trade-off of being cold-sensitive,” said Dr. Jessica Bellworthy, who conducted her doctoral research in Prof. Fine’s lab. “Indeed we found that exposure to cold water periods causes a physiological response akin to bleaching.” Better known as a response to high water temperatures, coral bleaching, is the loss of algal symbionts that must be present within the coral tissue in order to provide the coral with energy. Without the symbionts, the chances of coral mortality are high. Coral bleaching is the leading cause of coral decline in the world today. Therefore, while the corals of the Gulf of Aqaba can tolerate very high temperatures, even an acute cold spell may cause bleaching in this population.

However, Bellworthy and Fine’s cold stressed corals did not die and recovered once water temperatures returned to normal. Experimental corals were maintained at normal temperatures and then underwent a second test – an anomalously hot summer. “It was an important discovery for us to understand that even those individuals that suffered the cold winter stress, still did not bleach at the high temperatures,” says Bellworthy. This is good news for the corals in the Gulf of Aqaba; the high thermal tolerance is not lost and thereby corals should not undergo two bleaching events in the same year, a threat that faces others such as the Great Barrier Reef in Australia.

Coral reefs are highly sensitive to temperature change. Therefore, identifying those that respond differently to thermal stress aids in understanding the mechanisms of environmental adaptation in corals. In addition, researchers can focus attention on conserving and studying such unique reefs.