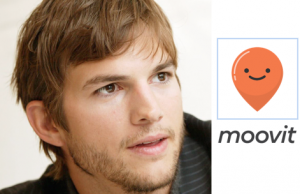 Moovit announced that the company has received an investment from Sound Ventures, a venture capital firm founded by Ashton Kutcher, a successful startup investor and actor, and Guy Oseary, investor and talent manager for both U2 and Madonna.

The company plans to use this investment to advance its growth in promising markets like India and China. Moovit is the top transit app in the world with service in more than 700 cities globally used by 30 million users, surpassing Google Maps and other competitors.

Sound Ventures launched at SXSW in Austin, Texas, in March of this year. The company has invested in numerous other successful technology companies, including Airbnb, Uber, Spotify, Houzz and Zenefits.

“We’re extremely proud to have Sound Ventures behind us as we continue to grow rapidly,” said Nir Erez, CEO of Moovit. “Investments like these help us to bring more public transit options to markets in need, like India and China, as well as to continue to strengthen our active community of editors around the world.”

Moovit relies on crowdsourced data from its participatory community of 20,000 editors to launch in a number of global markets that do not have readily available public transit data, including a recent launch in Bangalore, the third largest city in India, with a population of more than 8 million. The company is expecting to launch three more cities in India before the end of the year and is now also publicly launching four cities in China: Hong Kong, Shanghai, Guangzhou and Beijing.