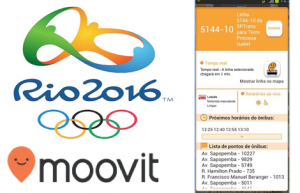 Technology will be one of the main allies for Rio de Janeiro residents and tourists who will share the city during August’s 2016 Summer Games. As part of the Olympics Mobility Plan announced by the City Hall of Rio, Moovit is delighted to announce it has been accredited as the official public transport app during the Games. This means it will be working with the city to indicate all the different transport services available during the period. These include scheduled bus services, BRT (Bus Rapid Transit systems), VRT (Versatile Rapid Transit), minivans, trains, metro stations, cable cars and barges that connect the city.

Users will have access to real time information, regarding special services put on for the Games and the availability of public transport (in order to plan journeys in advance with its wealth of options). Moovit will point people in Rio to the quickest or shortest options to move around different locations. The smart public transport app uses a clever mix of official data provided by the local transport agencies alongside crowdsourced information about a user’s journey in real time adding to its reliability and accuracy.

In total, there will be more than 50 km of lines and services mapped that will connect the public transport system to competition venues, located in Barra, Deodoro, Maracanã e Copacabana.

“Rio is advancing in the use of technology and the partnership with Moovit will allow not only people attending the Olympics, but the local community as a whole to have access to a multimodal trip planner with real time information. This will let people plan journeys and have more security and regularity when riding on public transport, which is a great achievement for the Games period and an important legacy for people in Rio”, says Rafael Picciani, Transport Secretary of Rio De Janeiro.

Access to all competition venues in the Games will be possible by public transport to all users who have the Olympic Transport Card (Cartão de Transporte Olímpico, in Portuguese). This is an individual passport – a Day Rover ticket in other words – allowing unlimited travel on all modes of public transport over a single day. Thanks to this important initiative, Moovit will be able to assist over 1.5 million people in the city that already use the app on a daily basis and over half million tourists who are expected to land in Rio to watch the Olympic Games.

“Contributing directly to the successful running of the Olympic Games is a perfect match for Moovit’s mission to make taking public transport easier and more enjoyable. We are very happy to help the City to solve one of its key challenges faced as the world turns its attention to the Games”, says Nir Erez, Moovit CEO. “By using Moovit, Rio locals and visitors alike will be able to navigate easily as they watch the Games”, he adds.

Multilingual support and accessibility for all

Ensuring that all information will on hand to as many people as possible, Moovit is available in 35 languages, including Portuguese, English, Spanish and French. The app also has settings that enable blind people to navigate a public transport system with the app (available on iOS and Android devices).

Travellers to the city will also find links to Moovit on the official tourist website (www.visit.rio), which gives a handy guide to the best leisure, gastronomy and urban mobility options in the city. An additional service will be the option to share routes with personal contacts by email or social media.

Moovit is available in 60 countries across 800 cities and and has over 35 million users. Brazil is one of its leading markets with more than 10 million people using the app.