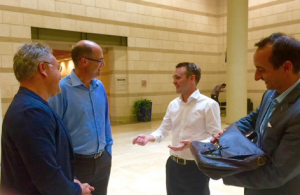 The Chief Scientist at the Israeli Ministry of Economy, Avi Hasson, is conducting his first official visit to Australia this week, including visits to Sydney, Canberra and Melbourne. Hasson is holding meetings aimed at bolstering bilateral scientific and technological ties between Israel and Australia. As part of his visit, Hasson signed an R&D agreement with the Commonwealth Bank of Australia.

Chief Scientist Avi Hasson said: “This is the first multinational Australian corporation joining Israel’s program of collaborating with multinational corporations. This testifies to the program’s global nature and its benefits even for companies from distant countries, especially those that do not yet have a permanent presence in Israel. In addition, this is the first bank joining the framework. The Australians were impressed with the program’s value and its potential contribution to banks and the financial industry in general. The interest shown by the bank in Israel’s innovation industry is focused mainly on cyber-security companies.”

Commonwealth Bank is a multinational Australian bank with branches in New Zealand, Fiji, across Asia, the US and Britain. The bank, founded in 1911, is one of the four largest banks in Australia, together with ANZ, National Australia Bank and Westpac. It was founded by the Australian government and was fully privatized in 1996. In September, 2014 the bank was valued at $115.4 billion and its profits reached $7.7 billion

The MNC program at the Office of the Chief Scientist offers a unique framework for technological cooperation between Israeli companies and multinational corporations. According to the agreement, the Chief Scientist helps multinational companies scout for Israeli technologies meeting the corporation’s needs and provides financial support for completing necessary R&D. The multinational corporation supports the joint project with matching funds – either via investment or by lending equipment, providing technological and regulatory consultation, marketing directions, etc. In this manner, the corporation helps the Israeli company grow and opens it options in markets abroad.

During his working visit, Hasson took part in several events, including:

* Re-launching the VISTECH program, a framework of R&D cooperation with the State of Victoria. The program allows companies from both states to submit requests for funding of joint R&D projects.

“This visit is clearly a testament to the high regard Australia has for the Israeli innovation economy,” said Chief Scientist Hasson. “A number of Australian government and trade delegations have visited Israel in recent months, focusing on lessons from the ‘Startup Nation’ in promoting innovation and entrepreneurship.”