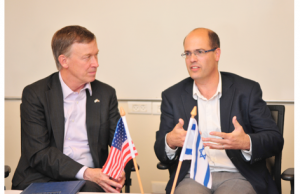 An official signing ceremony between the State of Colorado and the State of Israel on the implementation of the joint industrial R&D Agreement between the States took place on Sunday, October 19th, 2015. The goal is to establish a mechanism of cooperation with parallel funding for companies from both countries conducting joint research and development projects.

Under the agreement, Israeli companies will team with Coloradoan companies to co-develop and commercialize innovative products. The companies will receive financial support from both states. In Israel, support will be granted by the Office of the Chief Scientist at the Israeli Ministry of Economy and in Colorado participants will be supported through a new fund established by the State of Colorado to support the initiative.

Colorado already signed an R&D agreement with Israel in 2010, but the two states decided to renew the agreement following Colorado’s decision to significantly increase budgets earmarked for Coloradoan companies conducting R&D, including grants for local industry.

The official ceremony was attended by Colorado Governor John Hickenlooper and Chief Scientist Hasson. “We are proud to have Colorado among the list of 12 US states which cooperate with Israel on technology and R&D, including New York, Massachusetts, California Florida and others,” said Hasson. “Cooperation between Israeli companies and American companies has proven its value to both sides. The U.S. is a technological powerhouse and we are proud to be so attractive to U.S. companies, entrepreneurs, investors and developers.”

One of the most interesting examples of cooperation between Israel and a U.S. state is the joint space and aeronautic program with the State of Florida. Large Israeli companies like Elbit, Israel Aerospace Industries as well as small and medium companies  are helping unique innovative developments such as an advanced “stem-cell shield” and hydrogen-based power plants to become a reality. Only recently, two of the companies working within the framework of the Israel-Florida agreement, Israel’s StemRAD and America’s Lockheed Martin, announced the joint development of a protective shield for astronauts that can guard them from ionizing radiation in space, which exists as a result of the lack of protection provided by the Earth’s magnetosphere.