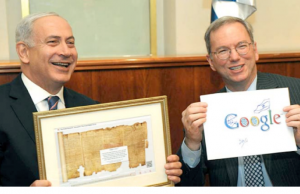 Prime Minister Benjamin Netanyahu, this afternoon (Tuesday, 9 June 2015), in Jerusalem, met with Google Executive Chairman Eric Schmidt. Prime Minister Netanyahu highlighted the cutting-edge nature of the cyber industry in Israel and pointed out that growing the industry was a national challenge of the highest order in the Israeli economy. In addition, the Prime Minister mentioned the effort made by Israel to diversify the markets with which it has trade relations in the tech field. He stressed the importance of teaching mathematics in high school and added that Israel would continue to work to attract investments of multinational companies in Israel.

Google Executive Chairman Schmidt emphasized Israel’s leadership in technology in general and in the cyber field in particular. He pointed out Israel’s capability to learn new technologies quickly and the creativity and entrepreneurship of Israeli industry. Schmidt further mentioned that Israel was second only to Silicon Valley in terms of number of start-ups, with over 6,000 start-ups founded in Israel in the last decade. He said that Israel is a leading country in the technology industry and Google’s commitment to invest in Israel would continue.