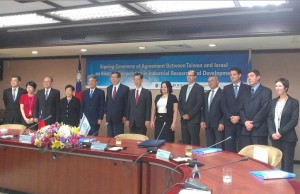 Chief Scientist at the Israel Ministry of Economy Avi Hasson: “As far as Taiwan is concerned, this agreement is groundbreaking – it is the first agreement of its kind Taiwan has signed. The agreement was also aided by the fact that Taiwanese industry holds Israeli innovative technologies in high esteem and many Taiwanese companies have already expressed interest in beginning to work on joint projects with Israeli companies.”

MATIMOP, the Israel Industry Center for R&D, responsible for implementing Chief Scientist programs for international cooperation in industrial R&D, has been finalizing a tenth call for action as part of the Israel-Jiangsu Program of Industrial R&D. This program was started in 2008 with the aim of supporting joint initiatives of companies from Israel and from the Chinese province of Jiangsu to develop products and services based on technological innovation.

During the visit, a joint committee headed by the Chief Scientist will convene to discuss and approve the projects submitted according to the program. Eight joint R&D projects will be presented and the committee will then decide regarding financing of the projects.

The Israel-Jiangsu program is the most veteran of the Israel-China programs and the one with the highest output.

Promoting an Initiative to Build a Chinese Park for Israeli Companies

The Province of Jiangsu is considered a major player in developing Chinese hi-tech and one of the leading engines of growth for the Chinese economy. The city of Zhengzhou in the Jiangsu Province about 180 km from Shanghai has five million citizens and a GDP of $44.6 billion (2010 data) and is considered one of the most attractive destinations for foreign companies since the local government encourages foreign investments.

Seeking to strengthen cooperation between Israeli and Chinese companies and to give Israeli companies mechanisms of support and long-term consultation regarding Israeli-Chinese cooperation, the Israeli Ministry of Economy, the Chinese Ministry of Science and Technology (MOST) and the Jiangsu Province government signed an agreement in 2014 to support the activity of Israeli companies in the China-Israel Changzhou Innovation Park in the city of Wujin in Changzhou.

The park will enable Israeli companies a significant reduction in the investment necessary for breaking into the Chinese market through unique grants and incentives, assistance in protecting intellectual property and other services like office space, human resources, permits and licenses, logistic management and others intended to cut short the amount of time it takes to penetrate the market.

An agreement with the Zhejiang Province was signed in May, 2014. The Zhejiang Province has become one of the wealthiest provinces in China over the past few years due to a development model (named the “Zhejiang Model” after the province) which promotes entrepreneurship, small businesses and investment in infrastructure. The spirit of entrepreneurship and innovation in the province has made it a center of hi-tech and private investments, which have turned the province into a focal point of international cooperation between Israeli and Chinese companies.

During the visit to Zhejiang, the Chief Scientist will meet the governor of the province and senior officials in the science and technology department. The Chief Scientist arrives with the aim of tightening cooperation with this important province ahead of the launch of a new bi-national program of support in industrial R&D between Israel and Zhejiang. The Governor of Zhejiang is expected to visit Israel in May, 2015 to hold diplomatic and business meetings. The Governor will be accompanied by a delegation of companies which will come to Israel for B2B meetings with Israeli companies.

While in Zhejiang, the Chief Scientist will also visit Alibaba, the Internet retail giant which announced its first investment in Israel early this year. Alibaba invested in Visualead, an Israeli startup allowing users to create unique QR codes. Alibaba also recently decided to invest in the JVP venture capital fund.

The goal of the meeting with Alibaba is to encourage the company to open an R&D center in Israel and to offer help in scouting for Israeli technologies for investment purposes.

During the Chief Scientist’s upcoming visit to China, he will sign a cooperation agreement in R&D with Taiwan. The agreement is expected to boost cooperation between the economies of Israel and Taiwan. The authorities responsible for implementing the future agreement will be the Office of the Chief Scientist at the Israeli Ministry of Economy through MATIMOP and DoIT, the Department of Industrial Technology of the Ministry of Economic Affairs (MOEA) of Taiwan.

The agreement will be signed on April, 20th in the presence of Chief Scientist Avi Hasson and Taiwanese Minister of Economic Affairs John Chen-Chung Deng. In recent years, Israel has signed several such agreements, but only recently with important countries like Japan and Mexico. While for Israel such agreements are more common, for Taiwan it is groundbreaking since it would be the first such agreement Taiwan has signed.

The government of Taiwan invests significant resources in research and development and has already in the past financed cooperation in academic research but there was never government support for cooperation in R&D between private Taiwanese companies and foreign companies. Therefore, the Israeli trade mission in Taiwan, with help of a representative of the Israeli Foreign Ministry and the Office of the Chief Scientist have invested much time in negotiations, visits and meetings. These efforts finally are bearing fruit as Taiwan has decided to sign the agreement.

Taiwan today is in increasing competition with its Asian neighbors: Japan, South Korea and China, and its only way of maintaining a competitive edge is by encouraging innovation. Accordingly, the country has begun directing more resources to research and development, but this is a lengthy process and there is no doubt that cooperation with Israel can help Taiwanese technology move forward by leaps and bounds.

The agreement has great importance since the joint governmental support by Taiwan and Israel is expected to significantly increase cooperation. The Taiwanese are conservative by nature and entering into a venture with an Israeli company will be considered less risky with governmental financial backing.

The economies of Israel and Taiwan are not competitive by nature but rather complementary. Taiwan has a trade-oriented economy and is a world power in engineering and quality manufacturing, while Israel is a world leader in innovation. For this reason, possibilities for cooperation in research and development are diverse and numerous.

Head of Economic and Trade Mission in Taiwan and the Philippines, Doron Hemo, said: “In recent years, we have seen increasing interest from Taiwanese companies in what is happening in Israel. Taiwan today understands what was perhaps not clear four or five years ago – that Israel has much to offer in innovation and hi-tech and in fact both economies can be mutually beneficial. As evidence, we have seen in recent months repeated visits by flagship Taiwanese companies in Israel and we expect to see an increase in cooperation and visits from the Israeli industry to Taiwan.” Hemo added that the agreement itself is immeasurably important for both economies and was certain that we will very soon witness joint R&D projects which will further increase bilateral trade.

Head of the Israeli Bureau for Economy and Culture in Taiwan, Simona Halperin, emphasized that “Taiwan has in recent years discovered Israel as a powerhouse of innovation and entrepreneurship, complementary to Taiwan’s economic prowess as a world power in engineering and manufacturing. It is no secret that Taiwan is boarding the train several years after its neighbors – technology powers and competitors in eastern Asia like Korea and Japan – since the concept of government funding for R&D for Taiwanese and foreign companies is new to this country. On the other hand, in light of the fact that Taiwan has been looking in recent years for a way to reinvigorate its growth and return to the forefront of the Asian tigers, we expect this agreement to enable many opportunities for cooperation between companies and to become a stepping stone not just for bilateral cooperation but also for opening new markets for Israeli companies in Asia – from China to southeast Asia.”

The leading industries in Taiwan today are knowledge-based industries, and several Taiwanese companies are world leaders in their fields: Foxconn, the world’s largest manufacturer of electronic components and one of Apple’s leading suppliers; HTC, a manufacturer of smart phones and tablets; TSMC, the world’s largest chip producer; ASUS and Acer, manufacturers of computers, tablets and smart phones. Taiwan also holds a significant share of the overall world production of electronic components: 20% of the global semiconductor market, a quarter of the world’s LCD screen production and almost 90% of laptops.

Already today, some of the above-mentioned Taiwanese companies and others are implementing Israeli technological innovations in their products and now this trend is expected to be significantly strengthened. Today, trade between Israel and Taiwan is relatively low and stands at $1.3 billion, despite the great potential. After the agreement is signed, trade ties are also expected to increase.

Following the agreement, a call will go out for Israeli and Taiwanese companies to jointly submit proposals for industrial R&D projects that will be supported financially by the Taiwanese and Israeli governments.