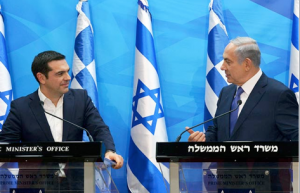 Prime Minister Benjamin Netanyahu met with Greek Prime Minister Alexis Tsipras.  They two agreed on extensive bilateral cooperation in – inter alia – economic matters, technology, science, education, trade, energy, agriculture. It was agreed that a G2G meeting would be held; an additional meeting was also decided upon which will include the President of Cyprus.

Prime Minister Netanyahu said after the meeting: “Prime Minister Tsipras, Alexis, it’s a pleasure to welcome you to Jerusalem. This is your first visit here. I am sure not the last. We have a growing and enduring partnership between Greece and Israel. We are two countries with ancient roots. In many ways, our modern civilization in the West was forged in Athens and in Jerusalem, and we are – although we are ancient peoples, we embrace the future, we embrace modernity. We’re the two democracies in the eastern Mediterranean and we are obviously aware that we have a world of opportunities – of technology, of development, of progress – to seize and we can seize it better through cooperation. But equally we also understand that there are great challenges before us, especially very violent religious fundamentalism that seeks to sweep our world, is sweeping the Middle East, is sweeping North Africa and Europe and other parts of the world. And we have a common interest in seizing the opportunities and warding off the dangers.

This has been an important part of the context of our discussions here – very broad, very deep and very productive – as we increase our cooperation in energy, which we discussed at great length, and in science, in technology, in culture and education, in youth exchanges, in political dialogue and diplomacy, in combatting terrorism and ensuring public safety, in maritime transportation and in tourism. I feel I have something to contribute to tourism in Greece because I was, in my early visit to Greece, I said – I think we had only 50,000 Israeli tourists at the time. I said we’ll grow it by hundreds of thousands. Today we’re at 350,000. It’s a lot but there can be more and we of course welcome every visitor from Greece, beginning with the Prime Minister, and everyone else. There is, as you said, a natural affinity between the Israelis and the Greeks. It’s very obvious when you go to either country.

We’ve just had a discussion. The Prime Minister of Israel sits on one side; the Prime Minister of Greece sits on the other side. And in some countries, when we have that, the leaders are the only ones who speak. Here, everyone speaks on both sides of the table. And this is what I’m talking about – a natural sympathy, a natural affinity.

And I want to say that we also have a natural affinity in your efforts to reform and build up the Greek economy. I know that you are taking very difficult steps. They’re appreciated I think worldwide, but they’re also appreciated by me because I had the misfortune of having to do the same here. I know how difficult it is and I see that you are consistently and with great determination doing very difficult things. And we believe in your success. We believe the Greek economy will bounce back and I intend to encourage Israeli investors to invest in Greece. We discussed some ideas of common projects and business projects that I believe would be to the benefit of Greece, but also to the benefit of Israeli-Greek business cooperation.

So I welcome you here in the best of friendship and in the confidence that we can make our friendship grow even more in the coming years. We have agreed on having a continuation of our Government-to-Government meetings and we’ll continue in very practical plans as a result of this visit. It’s a welcome visit and I welcome you, Alexis, and all your delegation here in Jerusalem.”