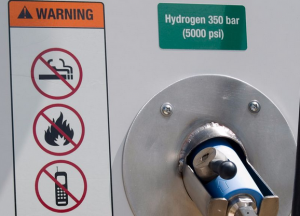 A new st​udy  presents a breakthrough toward understanding the mechanism of splitting water. Researchers led by Dr. Arik ​Yochelis and Dr. Iris Visoly-Fisher of Ben-Gurion University of the Negev and the Technion, have cracked the chemical mechanism that occurs during the photochemical splitting of hydrogen peroxide (H2O2) over iron-oxide photo-electrodes.

The discovery, they say, could have a significant impact on efforts to replace carbon-based fuels with more environmentally friendly hydrogen fuels. Car manufacturers seek to develop hydrogen-powered vehicles that are considered efficient and environmentally friendly and that, unlike electric vehicles, allow for fast refueling and extended mileage.

The researchers say that although it has been well-known for decades that production of hydrogen that does not emit greenhouse gases requires the splitting of water molecules (H2O) into the elements from which they are composed (two hydrogen atoms and one oxygen atom), that process has always demanded more energy than was gained back at the end of the process. As a result, it has never been commercially viable.

To conquer this challenge, the researchers were the first team to successfully reveal the fundamental chemical reaction present in solar power that could form the missing link to generate the electricity necessary to accomplish this process. That would allow the process to unfold naturally instead of relying on large amounts of man-made energy sources or precious metals to catalyze the reaction.

After a years-long stage of challenging experiments during which Prof. Avner Rothschild’s laboratory at Technion was unable to overcome the barrier in efficiency, he approached Drs. Yochelis and Visoly-Fisher to collaborate in the attempt to understand the missing piece of the puzzle.

“Beyond the scientific breakthrough, we have shown that the photo-electrochemical reaction mechanism belongs to a family of chemical reactions for which Prof. Gerhard Ertl was awarded with Nobel Prize in Chemistry, about a decade ago. Our discovery opens new strategies for photochemical processes,” says Dr. Yochelis of BGU’s Jacob Blaustein Institutes for Desert Research (BIDR) and the Alexandre Yersin Department of Solar Energy and Environmental Physics(YDSEEP).