Weizmann (Israel): One ion and thousands of atoms, all at a millionth of a degree above absolute zero 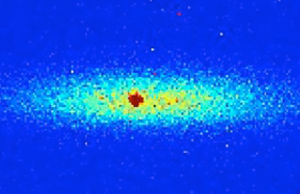 Fluorescence image of a single trapped Sr+ ion immersed in a cloud of 100,000 trapped Rb atoms. The ion is trapped by radio-frequency fields. The atoms are trapped by a focused laser-beam. Both species are cooled to a temperature of a millionth of a degree Kelvin above absolute zero temperature

At the very lowest temperatures, electricity and “superfluids” flow without resistance, and other weird quantum phenomena appear. Scientists can now cool matter down to less than a millionth of a degree above absolute zero (Kelvin) using lasers that trap the atoms and slow their movement down to nearly nothing. In this setting, clouds of hundreds of thousands of neutral atoms can be cooled, and a new state of matter emerges. In a second type of experimental setup, small numbers of ions – charged atoms – are cooled in traps, and their oscillations are so precise they can be used as atomic clocks or possibly, in the future, the basis of quantum computers.

The group of Prof. Roee Ozeri of the Physics of Complex Systems Department of the Weizmann Institute of Science has performed both types of experiments in the past, cooling ions as well as clouds of neutral atoms to a millionth of a degree K. Their new question was: What happens when clouds of atoms are mixed with ions and cooled in the same trap? Could this lead to the discovery of new quantum phenomena? 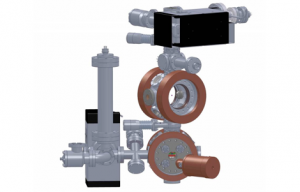 The super-ultracold experimental system consists of two vacuum chambers. In the top chamber, trapped atoms are cooled to a few millionths of a degree Kelvin, and then, in the second chamber, retrapped and mixed with a single ultracold ion

Ozeri, Staff Scientist Dr. Nitzan Akerman, and research students Dr. Ziv Meir, Tomas Sikorsky, Ruti Ben  and Dr. Yoni Dallal began by cooling to a millionth of a degree K a cloud of about 100,000 atoms; they then did the same for a single ion, which they added to the cloud. The group then observed the energy changes of the ion over time. They expected that the ion would remain cold, since it was surrounded by a large number of very cold atoms, but to their surprise, it began to heat up. There was a significant difference between the predicted temperature of the ion and that measured in the experiment, and the researchers looked for an explanation.

They discovered that as the ion was continually oscillating – due to the electric fields that had trapped it – it collided over and over again with the atoms, causing it to heat up. In fact, they found that the energy distribution of the ion after it had collided with the atoms was unusual and extreme, revealing events in which the ion heated to energies 1,000 times greater than its initial temperature. These results suggest that there is a limit to how low one can cool mixtures containing atoms and an ion.

“In effect, we have exposed the mechanism that determines the limits to cooling,” says Ozeri. “To do so, we used mathematical tools that will now enable us, and other researchers around the world, to investigate similar processes in different systems.” These mathematical tools, because they explain the distribution of extreme events in dynamic systems, could be applied to numerous systems that have nothing to do with quantum mechanics – for example, the ups and downs in stock prices or the values of shares on the stock market.

Prof. Roee Ozeri’s research is supported by the Crown Photonics Center; the Deloro Institute for Advanced Research in Space and Optics; Martin Kushner Schnur, Mexico; and the estate of Olga Klein Astrachan.