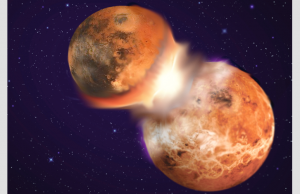 A research done by Technion researchers sheds a new light on the origins of the Moon and its composition. The research, published in Nature, was lead by post-doctoral researcher Dr. Alessandra Mastrobuono-Battist and her adviser Assistant Prof. Hagai Perets from the Technion, in collaboration with Dr. Sean Raymond from Nice University. 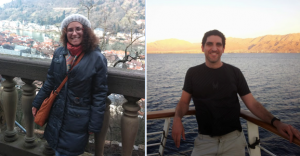 “Many models for the Moon origin were suggested by scientists, but since the 1980s the scientific community has been focusing on the most promising model  – the so called ‘giant impact’ paradigm,” explains Perets. “According to this model, the moon was formed following a collision between a small Mars-like planet (usually called Theia) and the ancient Earth. Some of the debris from the collision fell back to Earth, some was scattered far into space and the rest went into orbit around the Earth. This orbiting debris later coagulated to form a single object: the moon.”.

Based on complex simulations of such collisions, researchers have found out that most of the material that eventually forms the Moon comes from the impactor,  Theia, and only a smaller fraction originates from the impacted body (in this case, the Earth). Measurements of the composition of other bodies in the Solar system such as asteroids and Mars have shown that they have a very different composition from that of the Earth. Given that most of the Moon material came from another body in the Solar system, it was xpected that the composition of the Moon should be  similarly very different from that of the Earth, according to the “giant impact” model. However, analysis of samples brought from the moon by the Apollo missions showed otherwise – in terms of composition, the Earth and Moon are almost twins, their compositions are almost the same, differing by at most few parts in a million. This contradiction has cast a long shadow on the ‘giant impact’ model, and for some 30 years this contradiction was a major challenge to physicists grappling with the  formation of the moon. Now, Mastrobuono-Battisti, Perets and Raymond have suggested a new solution to this mystery.

Simulations of the formation of planets in the solar system, showed that different planets indeed have distinct compositions, as found from the analysis of material from different planets in the Solar system. Such studies have traditionally focused on studying only the compositions of the final planets, in the new research, Perets and collaborators have considered not only the planets, but also the composition of the impactors on these planets. Consequently they have discovered that in many cases, the planets and the bodies that collide with them share a very similar composition, even though they formed independently. Thus, conclude the researchers, the similarity between the moon and Earth stems from the similarity between Theia – from which the moon was formed – and Earth. “It turns out that an impactor is not similar to any other random body in the Solar system.

The Earth and Theia appear to have shared much more similar environments during their growth than just any two unrelated bodies,” explains Mastrobuono-Battisti. “In other words, Theia and Earth were formed in the same region, and have therefore collected similar material. These similar living environments also led them eventually to collide; and the material ejected mostly from Theia, ultimately formed the moon. Our results reconcile what has been perceived as a contradiction between the process whereby moons are formed (from matter from the impacting body) and the similarity between Earth and the moon”. “The Earth and the Moon might not be twins born of the same body”, summarizes Perets, “but they did grow up together in the same neighborhood.”