A Multiple-Impact Origin for the Moon 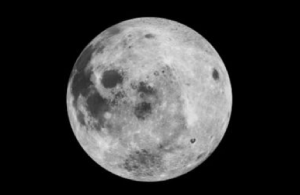 The formation of the Moon has remained something of a puzzle. A leading theory proposes a cataclysmic impact involving a Mars-sized object and a young Earth. But there are some inconsistencies with this scenario. A new study at the Weizmann Institute of Science, based on hundreds of simulations run on a computer cluster, suggests that a more plausible chain of events might involve a number of run-ins with smaller objects. This would have produced smaller moonlets that would have eventually coalesced into the single Moon we have today. The research appeared today in Nature Geoscience.

Research student Raluca Rufu and Prof. Oded Aharonson of the Weizmann Institute’s Earth and Planetary Sciences Department point out that the accepted explanations for the formation of our Moon rely on highly specific initial conditions – for example, a collision with an object of a particular size traveling at a defined velocity and hitting Earth at a specific angle. Furthermore, in a typical impact different proportions of that object would have ended up in the Earth and the Moon, leaving a detectable difference between the bodies. But various chemical analyses of the Moon’s makeup, taken from samples returned by astronauts, reveal that it is nearly identical to that of Earth. In other words, there is no trace of the large body that supposedly hit Earth, and the theories, say the researchers, turn out to be improbable.

Rufu and Aharonson, together with Dr. Hagai Perets of the Technion – Israel Institute of Technology, asked whether a number of smaller collisions might better explain what happened several billion years ago, when the solar system was taking shape. Such smaller bodies would have been more prevalent in the system, and thus collisions with the smaller objects would have been more likely. Small, high-velocity collisions could also mine more material from Earth than a single, large one. In addition, explains Aharonson, if a number of different bodies collided with Earth over a period of millions of years, their different chemical signatures – for example, ratios of oxygen-16 to its heavier cousins, oxygen-17 and -18 – might even out, masking the traces of the various collisions.

The collisions – with small planets one tenth the mass of Earth to space rocks the size of the Moon, a hundredth the mass of Earth – would have sent clouds of rubble, melt and vapor into orbit around the early Earth. These, according the simulations the scientists created, would have cooled and agglomerated into small moonlets that, in time, could have merged into one.

To test this scenario, the group ran around 800 impact simulations on the Weizmann Institute of Science’s Chemfarm cluster, which has more than 5000 processor cores.

“The new scenario does not require finely tuned initial conditions,” says Rufu, “and if the smaller moonlets, as we think, were drawn into the same orbit, they could have merged over millions of years.”

“We are now running further simulations to try to understand how the smaller moonlets produced in these simulations might have coalesced to form our Moon,” adds Aharonson.