TAU (Israel) researchers turn smartphones into powerful hyperspectral sensors, capable of identifying the chemical components of objects from a distance 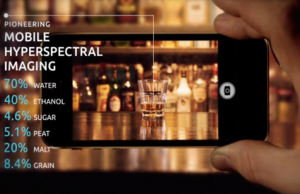 For the crew of the Starship Enterprise, Star Trek‘s “Tricorder” was an essential tool, a multifunctional hand-held device used to sense, compute, and record data in a threatening and unpredictable universe. It simplified a number of Starfleet tasks, scientific or combat-related, by beaming sensors at objects to obtain instant results.

The Tricorder is no longer science fiction. An invention by Tel Aviv University researchers may be able to turn smartphones into powerful hyperspectral sensors, capable of identifying the chemical components of objects from a distance. Prof. David Mendlovic of TAU’s School of Electrical Engineering and his doctoral student, Ariel Raz, have combined the two necessary parts of this invention: an optical component and image processing software.

“A long list of fields stand to gain from this new technology,” said Prof. Mendlovic. “We predict hyperspectral imaging will play a major role in consumer electronics, the automotive industry, biotechnology, and homeland security.”

Putting a camera and a database together

Prof. Mendlovic and Raz, together with a team of researchers at the Unispectral Technologies firm, patented an optical component based on existing microelectromechanical or “MEMS” technology, suitable for mass production and compatible with standard smartphone camera designs. The combination of this optical component and newly designed software go further than current smartphone cameras by offering superior imaging performance and hyperspectral imaging capabilities.

“The optical element acts as a tunable filter and the software — an image fusion library — would support this new component and extract all the relevant information from the image,” said Prof. Mendlovic. The imaging works in both video and still photography, he says.

Every material object has a hyperspectral signature, its own distinctive chemical fingerprint. Once the camera acquires an image, the data would be further analyzed to extract the hyperspectral content at any location in the image. “We are close to producing a prototype, which is scheduled for release in June,” says Prof. Mendlovic. “We unveiled the demonstration system at the MWC Barcelona conference this month and received excellent feedback.”

A device for everyone

Unispectral is in talks with other companies to analyze data from its cameras’ images. This back-end analyzer would need a large database of hyperspectral signatures at its disposal. Applications of the sensor include remote health monitoring and industrial quality control. “Agricultural applications may also benefit because hyperspectral imaging could be used to identify properties of crops, vegetables, and other types of foods,” Mr. Raz says. “Its hyperspectral platform is also suitable for wearable devices.”

Ramot, TAU’s tech transfer company, consolidated key intellectual properties and financed the engineering team to proceed with R&D and the business development. Unispectral‘s funders include the Momentum Fund, which is backed by Tata Group Ltd. and Temasek, an investment company based in Singapore. Another key investor is the flash memory firm SanDisk.

According to Prof. Mendlovic, Unispectral is currently in advanced discussions with major smartphone makers, automotive companies, and wearable device makers to move the technology forward.