Interview of David Sherzer, wizard of blue gold, by israelandyoo 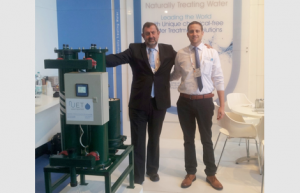 UET is an Israeli engineering and manufacturing company which leads the world in the treatment of water without chemical additives. We believe in using the natural attributes of water to fix the problems. Our company is based near Beer Sheva – Israel’s green-tech hub on the edge of the Sinai desert, where every drop of water is valued.

Developed in 1992, our technology has been tested by international chemical companies who set out to disprove its efficacy but who now recognize its advantages. Our systems are designed with the benefit of technical and engineering knowledge, and have been extensively tested in installations around the world. Our solutions are easy to install and maintain, and have been shown to reduce maintenance and water costs. We partner with engineering consultancies and water companies worldwide who are keen to use new green technologies to improve water efficiency.

The History of UET & David Sherzer

Founder and President of UET, David Sherzer is a water chemical engineering expert and a visionary in defining and developing new water treatment solutions. Before founding UET, he worked for 15 years at the Dead Sea Bromine. Sherzer globally launched award-winning innovative products for non-chemical water treatment. Fueled by his passion, David revolutionized the philosophy of water treatment thus providing the world with sustainable and economical solutions.

While working as a chemical engineer the problem of lime scale and corrosion always bothered him. At that time, while playing golf, he often found his golf balls in the small creek that ran alongside the course. He noticed one day that the water that flowed through this creek deposited scale at a certain point, after which there were no more scale deposits. On testing the water he found that its mineral composition was consistent, and he realized that water naturally balances itself by depositing excess minerals. He left his job to research the deposition of scale deposits. After five years of research and experiments, he developed a dynamic chemical engineering algorithm and invented a reactor that removes the components of lime scale from water by means of an electrical process, without using chemicals.

David Sherzer founded UET in 1992 to market this water treatment technology for industrial water systems. His discovery is protected with 9 patents and recognized by the USA-EPA, ANAB, and RONET. UET’s environmentally-friendly system was quickly adopted by Israeli industry and is now exported through major commercial partners worldwide.

For substantially eliminating scale buildup in a water processing facility, a water treatment method having the steps: accepting a scale formation standard value amount of scale formation that would occur in the facility from a cubic meter of water; measuring water from a water source for total hardness, alkali hardness, pH, and temperature; and therewith substantially removing a calculated scale removal target quantity from each cubic meter of the water source water just prior to entry of said water into the facility. Essentially, just prior to entry of each quantity of predetermined water into a water flow-through processing facility, removing more than about 0.1% of dissolved scale from the water quantity albeit less than 10% of dissolved scale from the water quantity.