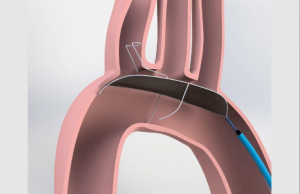 Late breaking trials at the ACC include the data from the first randomized, multi-center DEFLECT III clinical trial, testing the TriGuard Cerebral Detection Device designed to protect the brain during cardiovascular procedures: Use of the TriGuard was safe with numerically better in-hospital procedure safety;  Patients protected with TriGuard during TAVR were more likely to be free of new brain lesions post-procedure, particularly when TriGuard was used during implantation of Edwards’ Sapien family of valves. Complete freedom from ischemic brain lesion was observed in 50% of TriGuard protected patients treated with Sapien 3 – an unprecedented level not previously reported in any study; On DW-MRI post-procedure, single and maximum brain lesion volume was reduced by about 40% as compared to control patients who did not have TriGuard protection; Neurocognitive decline was reduced post-procedure in patients protected with the TriGuard device and patients with protection had improved short-term and delayed memory at discharge.

Keystone Heart announced that its CE marked TriGuard™ Cerebral Protection Device has improved in-hospital safety outcomes and cognitive scores at discharge during Transcatheter Aortic Valve Replacement (TAVR), according to preliminary findings from the DEFLECT III trial presented at the 64th Annual Scientific Session of the ACC.  Patients protected by the TriGuard device were also more likely to have complete freedom from ischemic brain lesions as assessed by Diffusion Weighted MRI (DW-MRI) post-procedure. Based on changes in NIH Stroke Scale, patients protected with TriGuard had 10% absolute reduction in stroke (4.9% vs. 14.3%). Minor strokes were under detected without detailed NIHSS assessment.

In an announcement released by the American College of Cardiology (ACC), Dr. Lansky stated that “Protecting the brain has become a priority to improve our patients’ outcomes and this is a new focus in interventional cardiology. Our data show that TriGuard is probably at least as safe as control, it appears to improve neurocognition at discharge, and when the device is properly placed, patients have fewer lesions and the volume of lesion is greatly reduced.”

“When a patient undergoes a procedure to improve cardiovascular function, risks of damage to the brain should be minimized whenever possible. The new results from DEFLECT III and previous results from DEFLECT I show that the TriGuard has the potential to do so,” said Shuki Porath, President and CEO of Keystone Heart. “I am hopeful the results of the trial will promote the recognition of cerebral embolic protection importance, and use in TAVR and other cardiovascular procedures.”

Vince Burgess, Executive Chairman of Keystone Heart commented “Our objective since day one has been to help bring the stroke and silent stroke rates seen during TAVR down to a level that is equal to or below that observed during traditional valve replacement surgery.  In this study, we have seen completely lesion free brains on DW-MRI in as many as 50% of patients when our device is used during implantation of the leading TAVR manufacturer’s latest generation valves. We are excited about the results of this study and we believe we are approaching our goal of helping to make this revolutionary procedure more widely available to patient populations.”

Keystone Heart’s TriGuard™ is the only cerebral protection device specifically designed to provide full coverage to all aortic arch takeoffs. The CE marked TriGuard™ Cerebral Protection Device is not yet commercially available in the USA.

The Company is focused on protecting the brain from emboli to reduce the risk of brain infarcts during TAVR, surgical valve replacement, atrial fibrillation ablation and other cardiovascular procedures. The TriGuard product pipeline is designed to help interventional cardiologists, electrophysiologists and cardiac surgeons to preserve brain reserve while performing these procedures.

Headquartered in Israel, Keystone Heart is dedicated to advancing patient care through innovative technology and clinical research. The Company’s management has extensive experience in the fields of interventional cardiology and medical devices.

Founded in 2004 and headquartered in Israel, Keystone Heart is funded by OrbiMed Advisors LLC and OrbiMed Israel Partners. The Company holds and maintains a comprehensive IP portfolio and is ISO certified.