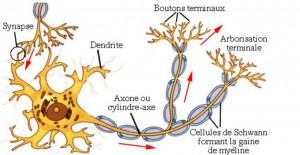 Though humans differ widely in their congenital abilities, a newly-discovered brain learning mechanism has led researchers to reveal an origin of the identical spectrum of strong and weak links that compose all brains.

The brain is a complex network containing many billions of neurons. Each neuron is connected to thousands of others via links (synapses) which can be strong or weak. A strong link indicates a significant influence between connecting neurons unlike a weak link, which could be tens of thousands of times weaker than a strong one.

One of the main challenges in neuroscience is understanding the origin and the possible functional significance of the very wide spectrum of link strengths which is common in all brains.

Recently, Israeli physicists led by Prof. Ido Kanter, of the Department of Physics and Gonda (Goldschmied) Multidisciplinary Brain Research Center at Bar-Ilan University, published an article in the journal Scientific Reports in which they demonstrated that learning in the brain is actually conducted by several neuronal terminals (dendrites), contrary to Donald Hebb’s 70-year-old theory that learning occurs only in the brain’s synapses. The researchers termed their discovery “dendritic learning”, and they showed that dendritic learning occurs much faster and in closer proximity to neurons.

In a new article, published today in Scientific Reports, the same group of researchers builds upon its previous research to reveal, through advanced computational studies, that dendritic learning leads to the universal phenomenon that all brains are composed of the same wide spectrum of links.

The (skeleton) structure of the brain is like a road map consisting of many narrow streets (i.e., weak links), and a small fraction of highways each containing thousands of lanes (i.e., very strong links). Such a diverse road map could either be a spontaneous outcome of a random brain activity, or alternatively could be directed by a meaningful learning activity, where the ”highways” direct the information flow in the brain.

“A byproduct of dendritic learning is the wide spectrum of link strengths. The dendritic learning enables us to offer an explanation for an additional universal phenomenon observed in all brains and indicates its important role,” said Prof. Kanter, whose research team includes Herut Uzan, Shira Sardi, Amir Goldental and Roni Vardi. The underlying mechanism is a fast response of a neuron to its strong entry compared to a slow response to a weak one. “The mechanism is similar to a pool filled through a pipe or through a narrow one.  The wide pipe fills the pool faster,” explained the research team.

The brain is not static, but rather very dynamic, where each link also significantly varies during brain activity. The fraction of strong and weak links remains always the same, however individual strong links can become weak and vice versa. “This dynamic brain activity leads to the capability that when we think about an issue several times we may find different solutions.” said the research team. In addition, this paradigm shift, dendritic learning, is expected to open new horizons for advanced deep learning algorithms and artificial intelligence-based applications.

This research is supported in part by the TELEM grant of the Council for Higher Education.