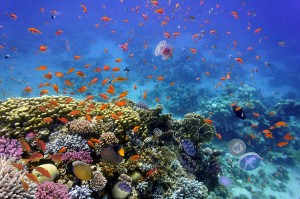 Under the leadership of a neutral third-party, Israel is about to embark on a joint project with neighboring Red Sea countries to establish a research center whose mission will be to study, monitor and protect the unique Red Sea coral reef ecosystems.

The new Red Sea Transnational Research Center was initiated by Prof. Maoz Fine, a marine biologist from the Mina and Everard Goodman Faculty of Life Sciences at Bar-Ilan University, and will include partners from Saudi Arabia, Egypt, Jordan, Eritrea, Sudan, Yemen, Israel, and Djibouti.  The Center will be led and organized by Switzerland’s Ecole Polytechnique Fédérale de Lausanne (EPFL).

Coral reefs, host to millions of marine species, are under stress and dying from the effects of global climate change and from local stress, such as pollution, overfishing and physical destruction.  But recently, a number of independent scientific studies, including by Prof. Fine and his colleagues, Profs. Anders Meibom, Dan Barshis, Chris Voolstra, demonstrated that the coral reefs of the Red Sea, including the Gulf of Aqaba, are extremely resistant to stress induced by global warming and rising water temperatures.  Red Sea corals are the most likely corals to survive ongoing global warming, which is already causing massive coral bleaching and mortality in nearly all other reef locations across the world.

The Red Sea corals are so resistant to rising seawater temperatures because they have evolved in geological settings and with an environmental history that are unique to the region since the last Ice Age.  But even though they are able to resist the direct impact of global warming, they still face severe threats, such as fish-farming, agricultural run-off, industrial and urban waste discharge and potential future seawater desalination activities.

The researchers say that these threats can best be addressed through shared knowledge and regional coordination, which will be facilitated through the establishment of the Red Sea Transnational Research Center.  The Center was inaugurated by the Swiss foreign minister in March in Bern, Switzerland, in the presence of diplomats and researchers from throughout the region.

“The relatively narrow sea is surrounded by countries and people who are directly dependent on the well-being of the coral reefs. At the same time, the proximity of urban areas and tourism to the reef may inflict damage to it if we aren’t wise enough to coordinate our actions when using this asset,” says Prof. Fine. “Our lab at Bar-Ilan University and the Interuniversity Institute for Marine Sciences in Eilat is focused on understanding resilience and how local disturbances adversely affect this unique resilience to global change,” he added.

The interdisciplinary Center will unite scientists from each partner country and from a wide range of disciplines, including oceanography, biology, genetics, ecology, geology, nature conservancy, civil and environmental engineering, and more.  The Center will make direct use of already existing research platforms in the different partner countries, such as the InterUniversity Institute for Marine Sciences in Eilat and the Jordanian Marine Station in the Gulf of Aqaba, as well as the research infrastructures offered by King Abdullah University of Science and Technology in Saudi Arabia.  New monitoring stations will also be created.

The Center will monitor and protect the unique Red Sea coral reef ecosystems through research into their health and biodiversity, and by creating a platform for research on the environmental impact of socio-economic developments along the shores of the Red Sea such as agriculture, urbanization, coastal infrastructure, fishing, and industrialization. The research will provide policy and lawmakers in the region with scientific analyses for decision making regarding key societal developments and environmental protection strategies.