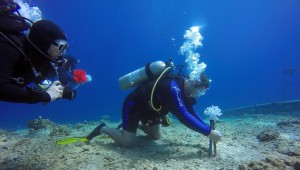 To combat the abuse and degradation of the world’s coral reefs, researchers at BGU and the Technion Institute of Technology have developed various 3D printed corals that could become new habitats. In some instances, the fish actually preferred them to natural corals.  Coral reefs worldwide are experiencing a continuous process of decay as a result of climate change, natural causes and human activity, particularly coral harvesting for aquariums.

The research, published in The Design Journal, focused on finding ways to create artificial corals made of bioplastics. They experimented with different materials, colors, sizes, and forms, stemming from a scanned natural coral model.

While other reef replacement projects are underway worldwide, including the Tamar Reef in the Gulf of Eilat by BGU researchers, this initiative is the first to focus on accurately reproducing corals that simulate the structure and functionality of natural living corals. These attributes include water flow around the coral structures, specific sizes that fit the diversity of fish species and proximity to food (plankton).

The study is part of a collaboration between the BGU team led by Prof. Nadav Shashar of BGU’s Marine Biology and Biotechnology Program and the Design-Tech Lab headed by Prof. Ezri Tarazi at the Technion.

In the study, researchers used 3D design tools to scan natural coral colonies, then structurally and spatially manipulate the scans to print the artificial ones. The researchers worked through a number of different materials and a variety of printers to achieve the 3D models. Ultimately, they installed four different forms of printed corals in several colors.

The goal was to examine what makes a “good home” and which designs the fish preferred. After the shelters were 3D printed, they were installed on a reef at the northeastern coast of the Red Sea, and near the Inter-University Institute for Marine Sciences in Eilat. Then Shashar’s marine biologists continuously dove the research sites over several months and tracked colonization of the models by naturally occurring fishes. Not only did the fish readily accept the 3D printed corals, but they preferred some designs and colors over natural live corals.

“We were surprised to discover that color mattered,” Prof. Shashar says. “Humans don’t take into account the outside colors of a house when deciding to buy one, perhaps because they can repaint it. Fish, on the other hand, indicated that the color of their potential new home was a make or break factor. Fish species that can see colors showed a clear preference for colored shelters over dull ones.”

Plaster 3D printed coral with two branches that was broken

Prof. Shashar says that designer’s observations and interventions were important during the concept validation process. By understanding the process of 3D printing and the materials used, the designers could quickly come up with solutions to the problems that arose during the process.

In their next stage of study, the researchers are seeking to design large reef units instead of single corals. “We want to understand what makes some structures work better than others,” says Shashar. “Our approach highlights the potential of tackling environmental challenges through design. Using digital design tools and methods, we can help the global effort to find better future practices to protect and restore coral reefs that are rapidly being annihilated.”

A new concept, “Nature-Centered Design,” according to Prof. Tarazi, encapsulates their approach to these colossal challenges.

“No discipline alone can address these challenges,” Shashar says. “There is a clear need for cross discipline collaboration. “We proved that the incorporation of designers in addressing urgent biological issues is beneficial and can serve as a model for incorporating design thinking to address biological questions and sustaining nature.”