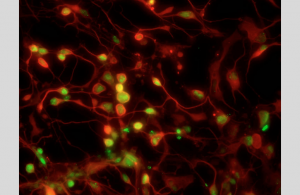 Human nerve cells made from embryonic stem cells infected with the varicella zoster virus, the causative agent of chicken pox and shingles. The nerve cells, along with their fine, long processes or axons, appear in red. Genetically engineered for fluorescence, the virus glows green

The red, itchy rash caused by varicella-zoster – the virus that causes chickenpox – usually disappears within a week or two. But once infection occurs, the varicella-zoster virus, or VZV, remains dormant in the nervous system, awaiting a signal that causes this “sleeper” virus to be re-activated in the form of an extremely unpleasant but common disease: herpes zoster, or shingles.

In a study recently published in PLOS Pathogens, scientists at Bar-Ilan University report on a novel experimental model that, for the first time, successfully mimics the “sleeping” and “waking” of the varicella-zoster virus.   Based on neurons generated from human embryonic stem cells, and not requiring the use of experimental animals, the model allows scientists to test drugs and develop therapies to prevent shingles. It may also contribute to the fight against other viruses – such as herpes and polio – that target the human nervous system.

“Most adults harbor latent VZV in their nervous system – a ‘souvenir’ from a bout with childhood chickenpox,” says Prof. Ronald Goldstein, a member of BIU’s Mina and Everard Goodman Faculty of Life Sciences. “In one-third of people over 50, or in those with weakened immune systems, VZV re-activation triggers the localized rash, itchiness and pain of shingles. In one-third of these cases, however, shingles symptoms are far more serious, causing debilitating pain that can last for months or even years.” Goldstein explains that, while an anti-shingles vaccine exists, it provides effective protection in only 50% of cases, and cannot be given to immune-compromised patients – such as transplant recipients – who are at particularly high risk for shingles onset.

The new model – which makes it possible to establish stable, latent-state VZV in neurons derived from human embryonic stem cells, or hESCs – was created by Amos Marcus, a PhD student in Goldstein’s lab. A major contributor to the model is Prof. Paul “Kip” Kinchington of the Departments of Ophthalmology and of Microbiology and Molecular Genetics at the University of Pittsburgh, with whom Goldstein has been collaborating closely for the past five years. An authority on the genetic modification of VZV, Kinchington made key discoveries about proteins involved in VZV activity.

The significance of this advance is in its potential impact on biomedical research; the model makes it possible to experimentally trigger re-activation of the dormant virus, to characterize the molecular processes involved, and to identify potential targets for shingles-prevention therapies.

“We have now demonstrated hESC-derived neurons can host VZV in its dormant state in a petri dish for a period of up to seven weeks,” Goldstein says, adding that dormant infections were achieved using two different methods. In the first, neurons were exposed to small amounts of viral material together with anti-viral drugs. In the second method, a drug-free micro-fluidic set-up allowed the controlled infection of neural axons, something that more closely mimics the uptake of VZV by the human nervous system in chicken pox.

“Once the infection took place, fluorescent markers allowed us to differentiate between those neurons with an active viral infection, and those in which the virus was present, but was not actively spreading,” Goldstein continues. “The green-glowing cells, which were infected with dormant VZV, became our target. Our goal was to break down the cellular defenses that keep VZV quiescent – essentially, to wake up the virus as a way of modeling what happens when latent VZV wakes up, and attacks the body in the form of shingles.”

According to Goldstein, shingles is frequently associated with the some immune-compromising, system-shocking event – a linkage he has incorporated into his cell-based, experimental platform.

“Shock causes our bodies’ natural defenses to falter – whether the shock is a physical event like surgery, a ski accident, or even an emotional event, like divorce,” Goldstein says. “We therefore ‘shocked’ the dormant virus into action by introducing events that caused the sleeping virus to wake up and become active. For VZV, this is the first time that such re-activation has been achieved in a laboratory environment.”

A key factor in VZV re-activation revealed by the study was the critical role of temperature. “At first, we had difficulty obtaining a robust re-activation in tissue culture,” Goldstein says. “We then remembered that – in both chicken pox and shingles – viral replication takes place in blisters on the surface of the skin, not in internal organs. To more accurately mimic the re-activation process as it occurs in the body, we cooled our dormantly-infected human neurons down to 34 degrees centigrade – three degrees lower than normal internal body temperature. We found that, under these cooler conditions, VZV re-activation proceeded at a much more rapid pace, with many more neurons affected.

The current model builds on previous work in which Goldstein – a former President of the Israel Stem Cell Society who was the first researcher to successfully coax human embryonic stem cells (hESCs) into generating human peripheral sensory neurons – showed that hESC-derived neurons can host active, infectious VZV. In these earlier studies, Goldstein also produced microscopic movies showing – for the first time – how VZV rapidly takes up residence within living human neurons in culture, just as it does in children with chicken pox.

Now, by creating an experimental model that mimics the transition between latency and active infection, Goldstein and his colleagues have taken another important step forward.

“We hope to use this model to develop a therapeutic method based on gene editing, which would prevent the virus from waking up and causing shingles,” he says. “Such a method could be used in the treatment of patients with elevated shingles risk, such as people whose immunity has been compromised due to trauma, disease, or immunosuppressant therapies.”

Goldstein points out that for the past 20 years, chicken pox vaccinations used in the West contain a live virus that can, and has, re-activated to cause shingles. The new model, in addition to providing an experimental platform for the development of a safer VZV vaccine and genetic therapies to prevent shingles, may also be useful for testing drugs and genetic engineering strategies designed to combat any virus that attacks the human nervous system.

The above-described research is supported by the US National Institutes of Health, the Israel Academy of Sciences, the US-Israel Binational Science Foundation.