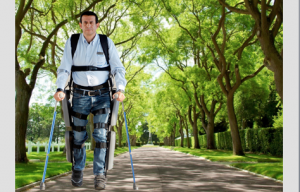 ReWalk Robotics Ltd. (Nasdaq: RWLK) (“ReWalk”), the leading global exoskeleton developer and manufacturer, announced today the publication of a first-of-its-kind case study in the peer-reviewed journal Spinal Cord Series and Cases published by the International Spinal Cord Society (ISCOS) demonstrating that use of the ReWalk robotic exoskeleton resulted in significant improvements in the quality of life for an individual with spinal cord injury.  The case study, co-authored by Prof. Dr. med. Karsten Krakow, studied the impact on ambulation ability as well as several quality of life measures as part of the SF-36 questionnaire, a 36-item, patient-reported survey of patient health. Following six months of ReWalk use in the rehabilitation setting, the subject was able to walk independently with limited supervision, and demonstrated significant improvements in several quality of life measurements including: mobility, risk of falling, motor skills and control of bladder and bowel functions.

“The study has confirmed what we can see with the ReWalk system also in daily practice: The ReWalk system on the one hand creates an additional possibility of mobility for the patient, but is moreover also an excellent therapy and training tool for people with complete or incomplete paraplegia. Use of the ReWalk device can immediately have a large effect on the quality of life of the user,” said Professor Dr. med. Karsten Krakow.

“This case study offers critical analysis on the impact of exoskeleton use on the health and well-being of those with spinal cord injury,” said ReWalk CEO Larry Jasinski.  “We are pleased with the findings of the report, and readily support the report’s recommendation for further studies with a greater number of participants.  With this case study, Dr. Krakow and his team have provided a significant finding of the effects of the ReWalk device that we believe will encourage greater provision of exoskeleton systems by healthcare providers for those with spinal cord injuries.”

The study concludes:
“This case report of treatment of a patient with SCI using the ReWalk system gives evidence of a positive impact on quality of life, ability to walk, cardiovascular endurance and motor neurological status.”

The case study also reported no complications such as falls, skin injuries or technical problems, supplementing the existing body of clinical literature demonstrating the safety of the ReWalk robotic exoskeleton.

About ReWalk Personal 6.0
ReWalk Personal 6.0 is a wearable robotic exoskeleton that provides powered hip and knee motion to enable individuals with spinal cord injury to stand upright and walk. The system provides user-initiated mobility through the integration of a wearable brace support, a computer-based control system and motion sensors. The system allows independent, controlled walking while mimicking the natural gait patterns of the legs. The ReWalk device is the most studied exoskeleton in the industry.  Studies have identified a number of health benefits including: improved bladder and bowel function, improved mental health, improved sleep, reduced fatigue, decreased body fat, decreased pain and improved posture and balance.

About ReWalk Robotics Ltd.
ReWalk Robotics Ltd. develops, manufactures and markets wearable robotic exoskeletons for individuals with spinal cord injury. Our mission is to fundamentally change the quality of life for individuals with lower limb disability through the creation and development of market leading robotic technologies. Founded in 2001, ReWalk has headquarters in the US, Israel and Germany. For more information on the ReWalk systems, please visit http://www.rewalk.com.

ReWalk® is a registered trademark of ReWalk Robotics Ltd. in Israel.