Estonia: Newco2fuels (NCF) awarded for its “innovation potential” at the quality innovation of the year 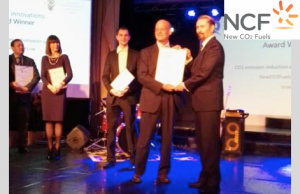 NewCO2Fuels  (NCF), an Israeli start-up which transforms CO2 emissions into a clean fuel that can be sold as a commodity at competitive prices, was announced as the winner of the “Innovation Potential” category during the 2015 International Quality Inno vation of the Year Awards Ceremony this month in Tallinn, Estonia.

The International Quality Innovation of the Year selects winners from  a total of 42 innovatio n proposals within seven different categories from 10 countries. NewCO2Fuels proceeded to  win the International Competition for Innovation in the category of Innovation Potential for its revolutionary, cost-effective solutions for global concerns for the CO2 emission and resulting in global warming and received a signed letter of signification from the president of Finland.

Located adjacent to the prestigious Weizmann Institute of Science outside of Tel Aviv, NCF stands out amongst clean tech companies by having created a self-sufficient system that requires no additional feedstock or energy source other than waste streams namely CO2 and excess heat of major energy-based industries. NCF’S  heat-powered and CO2-reducing plant allows companies to transform their harmful, earth-threatening waste into a clean, sustainable “syngas” that can be converted into commodities such as chemicals, fertilizers and fuels.

With the recent Paris Summit (COP21) behind us, international business and government sectors connected  with green innovation companies in order to accelerate both international sustainable development and the ‘green economy’. NewCO2Fuels offers a viable economic solution while reducing green house gas emissions.  These clean products can be sold at present market prices while being profitable to their producers with no need of governmental incentives or subsidies.

Among NCF’s growing international validation and recognition is the receiving of several awards and grants, including: The 2014 World Technology Network (WTN) award for Energy (corporate category), joining a prestigious list of past WTN award dinners including 3M, Amazon, Google and Facebook and others; naming by the Australian Government as a future fuel in its Alternative Liquid Fuel Technology Assessment report; The BIRD Foundation supporting a joint development of NCF and Acumentrics from the US; and the awarding of several grants from the Israeli Government to assist in the development of its innovative product.

About Estonia: Commenting on the Paris climate agreement, scientist Marek Strandberg vents his spleen at the Estonian government’s failed energy policy: “Even the otherwise so oil-shale-friendly environment minister has admitted that production of energy from oil shale is on its last legs. In fact that was already clear in 1997 when the Kyoto Agreement took this course. Nevertheless, in spite of the circumstances Estonia grit its teeth and tossed money out the window to continue producing energy from oil shale. For 18 years the public was fooled and the economy in north-east Estonia was obstructed [as no other sectors were developed]. … This late awakening to environmental concerns means that Estonia has lost more than ten years for possible innovation in the energy sector. Luckily it’s not too late. An innovative energy transition is still possible.”