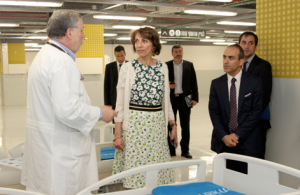 Marisol Touraine, French Minister of Social Affairs and Health, currently visiting Israel, met with his Israeli counterpart, Yaakov Litzman, with whom she announced the launch of French-Israeli cooperation on innovation, training and preparing the attacks and accidents. Exchanges between French and Israeli ministers were also successful on the themes of the fight against tobacco and the price of new innovative medicines.

Israël Science Info underlines the extremely important nature of this agreement at the highest level for cooperation France-Israel in the medical field.

This first day in Israel continued with a visit to the Weizmann Institute in Rehovot which the Minister praised the scientific excellence for medical progress through partnership between CNRS, Toulouse University and the Pasteur Institute. Then at Ichilov Hospital in Tel Aviv, recognized worldwide for its support of the victims of attacks, she visited the facilities of the crisis cell set up, including a car park which can be converted into an emergency hospital. Marisol Touraine announced: “To learn from the Israeli experience, I am today launching a joint mission with French reknown experts”. Finally, the Minister met the French Israel at a ceremony at the House of France, in the residence of the Ambassador Patrick Maisonnave.

The minister was yesterday morning at Yad Vashem in Jerusalem, where she laid a wreath in memory of the “six million Jewish victims of Nazi barbarism.”
She will exchange this Friday, April 1 with start-up designers, before visiting the Palestinian Territories.