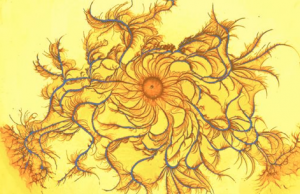 A photo from Eshel Ben-Jacob's research on bacteria TAU

The new exhibit at Ben-Gurion Airport features some 60 discoveries and developments selected for the innovative and pioneering qualities, and their direct and indirect influence on the lives of millions of people around the world. It will also feature TAU’s contribution to the world’s largest experiment: a huge system of state of the art muon detectors, developed and built in collaboration with the Weizmann Institute of Science and the Technion. It is central to the operation of the ATLAS experiment, operating at the European center for Nuclear Research (CERN).
The exhibition will officially open tomorrow, March 7th, and include large photos of the scientific discoveries and breakthroughs of each researcher.

The Ministry of Science, Technology and Space on Monday, 7 March 2016, at Ben-Gurion International (BGI) Airport, in the presence of Science, Technology and Space Minister Ofir Akunis and Transportation and Road Safety, and Intelligence Minister Yisrael Katz, launched a year-long wall exhibit of approximately 60 Israeli developments and discoveries that have affected the world. Nobel laureates, featured researchers and university presidents and vice-presidents for research will also attend.

The exhibit will be displayed on a giant wall just past passport control and will have the potential of reaching approximately 8 million people. The exhibit is designed for public diplomacy and to increase domestic public awareness of science. A recent survey shows that 43% of Israelis are unaware that Israel’s first President, Chaim Weizmann, was originally a chemist. Approximately 50% of Israelis were unable to name even one Israeli Nobel laureate scientist. The Science Technology and Space Ministry, in cooperation with the Israel Young Academy, initiated the Ben-Gurion Airport exhibit to present Israeli science.

The exhibit features approximately 60 discoveries and developments – chosen by a selection committee composed of representatives from the Israel Young Academy and the Science, Technology and Space Ministry Chief Scientist’s office – that were selected for the innovative and pioneering qualities, and their direct and indirect influence on the lives of millions of people around the world.

Sections of the exhibit are devoted to Israel’s eight Nobel science laureates, three Turing laureates and one Fields Medal winner, as well as to such prominent scientists as Chaim Weizmann, Aaron Aaronsohn and Albert Einstein.

Science, Technology and Space Minister Akounis: “The exhibit is a major public diplomacy asset for Israel. We are showing the vast contributions of Israeli science and technology to the world and all humanity. We have what and who to be proud of. Israel is a pioneering country and innovative leader. The entire world admires, and is amazed by,  our achievements; therefore, it is fitting that they be shown at the gateway into and out of Israel.”