Technion and Autonomous Traffic: Hundreds of students from the US, Russia, Ukraine, Argentina and Israel at the international “RoboTraffic” competition 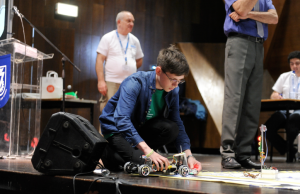 Hundreds of students from some 50 schools in Israel, USA, Argentina, Russia and Ukraine participated in the 2015 RoboTraffic competition held at the Technion last Thursday, March 12. The competition, held consecutively for six years, started out as a national contest that grew to become international.

The RoboTraffic competition is organized by the Leumi Robotics Center at the Technion’s Faculty of Mechanical Engineering, World ORT organization, and the World Zionist Organization in cooperation with the YTEK Foundation and Eytam Robotics Ltd. The overall goal is to provide students with the knowledge and skills of Robotics along with facts and awareness necessary for safe driving, in an attempt to minimize the involvement of young drivers in road accidents. The competition involved small mobile robots, shaped like miniature cars, to simulate road conditions.

“In preparation of the competition, the Leumi Robotics Center developed a ‘safe roads’ route course containing sensors that make contact with the car robots, and provide the vehicle with an automatic response to signaled obstacles as well as traffic lights and road signs,” explained Dr. Evgeny Korchnoy, the director of the Leumi Robotics Center at the Technion. “During the competition, the robots move along the track autonomously, in a manner ensuring the prevention of road accidents and in keeping with traffic rules. As part of the preparation for the contest, students learned about mechanics, programming, control and electronics as well as road safety skills.” 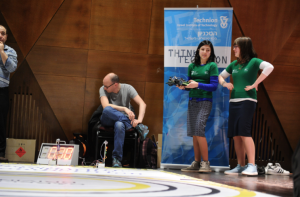 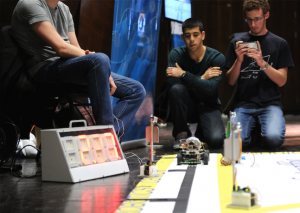 Rachel Lubarsky (14 years old) and Leah Baram (aged 15) along with their team Dnepropetrovsk, Ukraine, achieved the best and fastest results and won first place for high school students in the race category and in the use of the drawing software. They came to the competition at the Technion along with two more representatives from their team. The team’s accomplishments throughout the competition were very impressive. “My connection to technology is limited,” confesses Leah, “we study in a Jewish school, part of the Chabad network of schools, and it doesn’t offer any subjects in technology.”

“I take supplementary studies after school at the religious seminary for girls,” added Rachel. “This is where we were first introduced to robotics, and how we became involved in the competition.”

“We feel very comfortable here at the Technion,” they both agreed. “Israelis are very helpful. We’re not sure if we would like to live here in the future, but we’d be very happy to study at the Technion.”

“As part of the exposure of the younger generation to science and technology, the Technion attaches great importance to investing in young students,” said Prof. Moshe Sidi, Vice President of the Technion. “It is heartwarming to see such a great number of students from Israel and abroad partaking in this competition here at the Technion – all of whom share a common pursuit – a curiosity and interest in robotics and road safety.” 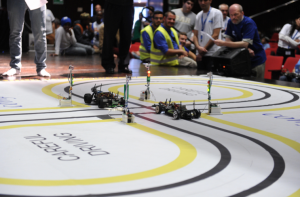 “Six years ago we held this competition for the first time with only five Israeli schools,” related Prof. Moshe Shoham, Head of the Leumi Robotics Center at the Technion. “Today, dozens of schools from Israel and abroad are competing in this competition. You are the next generation and you will be the ones that will bring Israel to the forefront of international robotics. Your generation will witness the revolution of autonomous transport vehicles and the roads of the future, and it will happen sooner than we think.”

“We are very pleased to bring our schools to Israel to compete in this advanced robotics competition that also teaches safe driving,” said Avi Ganon, the CEO of World ORT KADIMAMADA-ISRAEL. “Technology studies is an effective tool in strengthening the ties between the Diaspora and Israel, and important to Israel’s future.”

The team that won first place in the elementary school competition is from the ‘Future’ program of the Karnei Shomron education district. “We programmed the action of the robot, and added sensors so that it could navigate along the route and adhere to traffic lights,” explained Jonathan Makayten, a sixth grade student. “We take robotics lessons as part of the ‘Future’ excellence program during school hours.”

“This is a very interesting field,” added his fellow team member, Noam Cohen, a fifth grader.

In the various categories of the competition for secondary schools, the students from ORT Binyamina (Israel) and ORT Chernovtsi, ORT Odessa, and ORT Kiev (Ukraine) won first place.

The following schools won various categories in the ‘Mama-Robot’ competition for elementary and middle schools: Ga’ash, Ashalim Rishon Lezion, Misgav elementary school and Yavne group. In the ‘RoboTraffic-Junior’ category, the winning team was from the Amit-Amital School in Netanya.