New Zealand: an intruder caught thanks to israeli app Salient Eye on an old smartphone 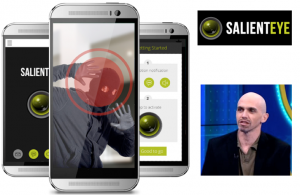 New Zealander Melissa Rodrigues’ three-year-old son claimed he heard an intruder. The first time she didn’t believe him. The second time, he showed her the proof – footprints in the mud. The third time the intruder appeared, Melissa and her husband caught him using the free app, Salient Eye, which allowed her to transform an old smartphone into a camera and motion detector.

“The support this app gave us was absolutely fantastic,” said Ms. Rodrigues. “It meant we didn’t have to put ourselves in harm’s way to look for him, and with the email alert we were on the phone to the police in literally seconds!”

Haggai Meltzer, founder and CEO, Salient Eye, created the app after he’d been robbed. “I had a drawer full of old smartphones. They were too old for the thief to take an interest, but not too old for me to figure out a better way to use them.”
The only hardware required is an old phone or tablet, with security only two clicks away. Requiring no registration nor payment, app setup is not technical; it’s all icon-based for simplicity. Salient Eye works on any Android system, as far back as 2.2 (2010) and sends notifications to any device.

Although the story is rather frightening – Ms. Rodrigues property was violated three times in three nights – there’s a happy ending.

Once the Salient Eye app “saw” the intruder, Melissa was immediately notified with an email alert. She called the police, and a manhunt of five police cars and a dog tried to track him down. The dog actually lost his scent, but the picture from the Salient Eye app provided enough details that the man could easily be identified. He was a neighbor living a few houses away. He was on a spree and confessed to everything – not only stealing tools from the Rodrigues family but also stealing from other neighbors.

Ms. Rodrigues found Salient Eye online. “Having no money to be able to buy a ‘proper’ system, I stumbled across the app, which allowed me to have a free, immediately available security setup. The app literally helped our whole community,” she said.