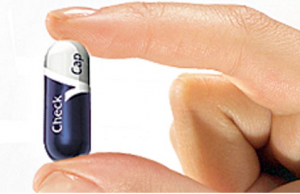 Israeli company Check-Cap which is developing an X-ray capsule for diagnosing intestinal cancer, announced the pricing for its Nasdaq IPO. The company raised $12 million at a $92 million company value, after money. The offering took place at the lower edge of the price sought by the company in its most recent prospectus – $15 million at a company value of $100 million, after money. At the same time, the company also yesterday closed a $12 million private placement, led by Chinese fund Fosun Pharma, with the participation of Check-Cap’s previous major investors: GE Healthcare, Pontifax, and others, meaning that the company raised a total of $24 million in the two financing rounds.

About Check-Cap: Early detection can save lives. Everyone over 50 should be regularly screened for colon cancer – and with Check-Cap, there’s now a non-invasive way to do it. Patients just swallow the capsule and continue their daily routine. The capsule will travel through the colon and be excreted naturally, all while transmitting relevant data to an external device (CPS) attached to the patient’s back. Check-Cap is not only patient friendly; it’s also designed to detect clinically significant polyps with a high degree of sensitivity.

Check-Cap’s ultra low dose X-ray Radar device is being designed to create reconstructed 2D and 3D images of the colon. No prior bowel cleansing is needed because its x-rays create 360-degree angular scans that can “see through” intestinal content. Exposure to radiation is minimal and equivalent to a regular chest x-ray. The capsule transmits data to a receiving device attached to the patient’s back, where it is stored for a physician’s analysis. If nothing is detected, no colonoscopy is necessary. If the 3D images reveal polyps, a therapeutic colonoscopy will be prescribed as needed.