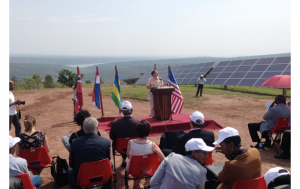 Only 12 months after the official signing of the Power Purchase Agreement (PPA), Gigawatt Global has succeeded in financing, constructing and interconnecting a $23.7 million solar energy plant, culminating in a ceremonial ribbon-cutting event. Rwanda’s Minister of Infrastructure, Hon. James Musoni, and the Chief of Staff of the U.S. Government’s Overseas Private Investment Corporation (OPIC), John Morton, will lead the ribbon-cutting on Thursday, February 5, at 12:30pm of the 8.5 Megawatt (MW) solar field at the Agahozo-Shalom Youth Village (ASYV), and will be joined by international representatives of the partners that developed the landmark project.

The Rwanda field – constructed in the shape of the African continent – brought together an international consortium of financing partners*. “Top quality developers like Gigawatt Global are the keys to success for President Obama’s Power Africa Initiative,” said Elizabeth Littlefield, President and CEO of OPIC. “After OPIC provided critical early-stage support through the ACEF program, Gigawatt smoothly and swiftly brought the project online to give Rwanda enough grid-connected power to supply 15,000 homes. Gigawatt Global in Rwanda is a clear demonstration that solar will be a key part of Africa’s energy solution.” 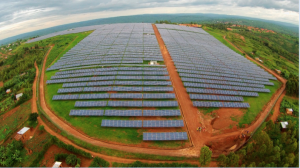 The Rwanda field constructed in the shape of the African continent

Chaim Motzen, Gigawatt Global Co-Founder and Managing Director, and the main force behind the development of the project stated, “Our project proves the viability of financing and building large-scale solar fields in sub-Saharan Africa, and we hope that this solar field serves as a catalyst for many more sustainable energy projects in the region.” He continued, “The speed with which this project was completed is a tribute to the strength of the Rwandan government’s institutions and their laser-focus on increasing Rwanda’s generation capacity as well as to the nimbleness of our team and partners which spanned eight countries.”

The Rwandan project is built on land owned by the Agahozo-Shalom Youth Village, whose mission is to care for Rwanda’s most vulnerable children orphaned before and after the Rwandan genocide. The village is leasing land to house the solar facility, the fees from which will help pay for a portion of the Village’s charitable expenses. Gigawatt Global will also be providing training on solar power to students of the Liquidnet High School on the grounds of the Youth Village.

“Anne Heyman, our Founder of blessed memory, held to a vision in which the Village practiced tikkun olam, the Jewish teaching to help heal the world.  In addition to our work with Rwanda’s most vulnerable children, we’re now helping to improve the lives of thousands of people through sustainable electricity generation,” said Laurie Toll Franz, ASYV’s Board Chair.

Yosef Abramowitz, President of Gigawatt Global, believes that “this utility-scale solar field at the Agahozo-Shalom Youth Village is a symbol of hope for sub-Saharan Africa’s tens of millions of orphans and 600 million people without power, ushering in a new era of impact investing that we will hopefully be replicating throughout Africa.  We want to thank President Obama and Secretary Kerry, along with our other financial partners, for the opportunity to celebrate this landmark electricity-generating project under Power Africa.”

Gigawatt Global is one of almost 90 private sector partners involved in the U.S. Government’s Power Africa Initiative, which is designed to increase access to electricity throughout all of sub-Saharan Africa. By providing creative financing, business development support and commercial advocacy through various U.S. Government agencies, Power Africa represents a new model of development which facilitates the work of its partner companies in developing new energy sources, including wind, solar, hydropower, natural gas, and geothermal resources in all of sub-Saharan Africa.

“The people of Rwanda should be proud to host the first utility-scale solar power plant in East Africa, and we hope that the pioneering spirit of Rwandan authorities may serve as an inspiration to other countries in the region. The ASYV project will be an important source of clean and reliable electricity for the next 20 years and beyond, and we are proud of having made this possible in cooperation with our partners Gigawatt and Norfund,” said Torstein Berntsen, Executive Vice President of Scatec Solar ASA.

Gigawatt Global’s 8.5 MW solar field in Rwanda is the first utility-scale project to reach financial close and come online under the Africa Clean Energy Finance (ACEF) program, which is now an integral part of the Power Africa Initiative.

FMO arranged the senior debt package for the Rwanda project. The other senior lender is EAIF. Norfund provided a mezzanine loan and equity.  Scatec is the lead equity investor and is serving both as the engineering, procurement and construction (EPC) and Operations and Maintenance (O&M) provider.

The PV plant will be located 60 km from the capital of Kigali on land belonging to the Agahozo-Shalom Youth Village (ASYV) for youth orphaned during and after the 1994 Rwandan genocide. The electricity will be fed into the national grid under a 25 year power purchase agreement with the Rwanda Energy, Water and Sanitation Authority (EWSA). Construction has already started and commercial operation of the solar field is expected by summer of 2014.

“It takes a global village to raise a solar revolution,” said American-Israeli entrepreneur and human rights activist Yosef Abramowitz, President of Gigawatt Global and CEO of Energiya Global Capital, Gigawatt’s Israeli affiliate that provided seed money and strategic guidance for the project. “There are 550 million people in Africa without electricity. Economic growth in developing markets depends on access to affordable, green power.  Environmentally-friendly solar energy is far less expensive than diesel-generated power. This first-ever utility-scale solar field in Rwanda – and all of East Africa – represents the future of energy for developing countries and for island nations. It is a game-changer for humanity and the environment.”

The Rwanda Minister of State in Charge of Energy and Water, Eng. Emma Francoise Isumbingabo said, “Generation and provision of electricity to all Rwandans is important for the Government of Rwanda. This initiative to produce 8.5 megawatts is a good addition towards closing the current energy gap.”

This complex project, completed in record time, was developed from concept stage to financial close by Chaim Motzen, Managing Director of Gigawatt Global. “Recognizing the energy imperative in Rwanda, we worked closely with the Government of Rwanda to execute quickly and effectively,” said Motzen. “We hope this initiative serves as a catalyst for future sustainable energy projects in the region. This could not have been completed without our project partners including Agahozo-Shalom Youth Village, Norton Rose Fulbright, Norfund, Scatec Solar, FMO and EAIF. SEDI Labs, led by Raffi Mardirosian, served as a key project development partner from the project’s inception.”

The project by Dutch-based Gigawatt Global was partially funded through grants from the Energy and Environment Partnership (EEP), a partnership of the British, Finnish and Austrian governments and the United States Government via the Overseas Private Investment Corporation’s (OPIC) ACEF Grant.

“OPIC is proud to have played a catalyzing role in this pioneering African solar project. The support provided through OPIC’s Africa Clean Energy Finance (ACEF) program helped Gigawatt Global  through its crucial development stage, when capital was needed to advance the project quickly and prove the project’s viability to investors,” said Lynn Tabernacki, OPIC’s Managing Director for Renewable Energy and Sustainable Development. “This project also proves the value of OPIC’s participation in the innovative ACEF and Power Africa initiatives, through which we support multiple similar projects throughout Sub-Saharan Africa.”
Norton Rose Fulbright provided exceptional legal support to the project. Simon Currie, global head of energy for Norton Rose Fulbright, personally oversaw the team for the project and was supported by senior associate Laura Kiwelu. The firm’s extensive energy project finance expertise and practical approach was critical in ensuring a feasible and bankable project. Norton Rose Fulbright made a substantial financial contribution to the project as part of its commitment to developing countries and strong CSR policy.

Reflecting its dedication to helping heal the world, Agahozo-Shalom Youth Village fostered the development of a solar field, located on Village property, that will generate enough electricity to contribute to a roughly 8 percent increase in the country’s electricity supply. ASYV is leasing land to house the solar facility, the fees from which will help pay for a portion of the Village’s charitable expenses.

Israel’s President Shimon Peres commented about the project’s location, which was modeled after post-Holocaust Israeli orphan villages, “As a pioneer in its sector and region, the solar field to be established in the Agahozo-Shalom Youth Village is an important stride in our mission for Tikkun Olam – making the world a better place. This wonderful initiative will serve as a shining beacon of hope and progress for humanity, and as an example of what Israel can contribute to the developing world. In the hope that Israeli renewable energy expertise can continue to serve developing communities around the world, I wish the Agahozo-Shalom Youth Village much success on behalf of the State of Israel.”

Alluding to future Gigawatt Global solar projects in development, Abramowitz said, “The human race bears a moral and practical imperative to provide power for all, while also transitioning from burning fossil fuels to harnessing renewables. The Rwanda solar field serves as a proof-of-concept to successfully develop and finance commercial-scale solar fields throughout Africa and in the developing world. It will be the first in a series of large fields we are planning in the coming 24 months.”