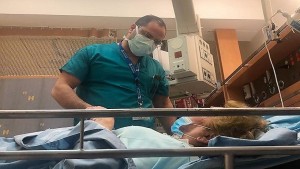 As COVID-19 continues to dominate headlines, public health experts have viewed this time as an opportunity to learn from the situation and plan for future pandemics that may arise from climate change and environmental degradation

The corona crisis has exposed the fragility of many health care systems to experts and the general public around the world. Some public health officials have viewed the recent crisis as a wake-up call for nations to invest in their healthcare systems. Dr. Negev of Haifa University says that “from a public health or health systems perspective, we can see how the coronavirus prepares us for future climate emergencies because we see how health care systems need to be prepared for periods with a great increase in morbidity.”

Dr. Hagai Levin, Associate Professor of Epidemiology at the School of Public Health at Hebrew University-Hadassah in Jerusalem, says that “some countries will learn their lesson and invest for future pandemics, and some won’t. It’s not only funds but even just planning. The key is to invest in strategies with co-benefits, which will either aid in promoting public health at regular times (for example better preparedness to seasonal influenza), or promote better preparedness for a wide variety of emergencies such as famine, earthquakes, and climate change.”

Dr. Uri Lerner, Scientific Director of Midaat, adds that the current pandemic “has made the world understand that we need to be prepared for pandemics by developing response strategies and purchasing medical equipment for future use.” He predicts that “developed countries that are suffering economically from lockdown policies will invest in future response and preparation” to avoid a similar economic disaster.

Furthermore, he says that while it may be difficult to predict the frequency of future pandemics, “we should assume worst-case scenarios in order for states to behave properly. If we assume that global pandemics will remain a rare phenomenon, occurring once every 20 years, people will not be sufficiently careful and will be ill-prepared.”

Countries will have to invest more in their health care systems in order to be prepared for future outbreaks. Photo by Hush Naidoo on Unsplash

Some experts believe that climate change and anthropogenic factors will increase the occurrence of global pandemics. In a webinar titled A Tale of Two Crises: Corona and Climate Change, Dr. Negev mentions that vector air-food-water borne diseases in the region are expected to be influenced by climate change as many disease vectors (agents that transmit infectious diseases) such as mosquitos will be able to thrive in warmer and more humid climates. She says that this trend could potentially contribute to the spread of certain diseases such as Malaria, Chikungunya, and West Nile fever.

Climate change may also expose humans and animals to diseases that have not been encountered for thousands of years. As warming causes permafrost in the arctic regions to thaw and glaciers to melt, some scientists are concerned about the potential release of harmful pathogens that have been frozen and dormant for millennia. Citing the case of an anthrax outbreak in Siberia in the summer of 2016 which was thought to be the result of a thawed reindeer carcass infected with the bacteria, Dr. Lerner says that “in this case, the exposure was relatively easy to isolate because it occurred in a remote area. Had it occurred in a more populated region or town with regular transportation to larger cities, the damage could have been more extensive. They also lucked out because anthrax is a well-known pathogen. The situation could have also been exacerbated if the pathogen had antibiotic resistance or if it had never been encountered by humans before.”

Aside from climate change, the expansion of human settlements across the globe has also raised concern among public health experts. This trend, along with deforestation, will likely increase the contact between humans and wildlife, and thus, increase the possibility of bilateral transmission of diseases that have rarely or never been encountered (such as Covid-19). Dr. Negev stresses the importance of preventing or minimizing this contact. “We should protect ecosystems and prevent deforestation, intensified agriculture, urbanization, and wildlife hunting, all of which bring wild animals in closer contact with human beings,” she said.

As warming causes permafrost in the arctic regions to thaw and glaciers to melt, some scientists are concerned about the potential release of harmful pathogens that have been frozen and dormant for millennia. Photo by Ahmed Radwan on Unsplash

While some experts warn that these trends seem inevitable, there are ways to prevent or at least mitigate and control future pandemics. Dr. Levin suggests that “we need to focus on science and surveillance. We need to be on guard and measure how the environment impacts humans and how humans impact the environment. Scholars from various disciplines and countries must work together.”

Echoing similar thoughts, Dr. Negev says that the recent outbreak has “vividly shown us that nations cannot combat epidemics on their own. In the future, regional and international collaborations will be needed for monitoring and surveillance, as well as for the production and sharing of medical equipment.”

According to Dr. Lerner, it will become “necessary to produce an orderly global monitoring system for infectious diseases to identify outbreaks as early as possible, even in countries that are not sharing information (such as China) or that have limitations in accessibility to technological tools (such as in Africa, or various remote areas of Asia, and South America). International organizations will need to assume responsibility in guiding and producing tools in collaboration with those countries.”

Dr. Lerner also suggests that international treaties dealing with pandemic guidelines should be drawn up in light of the recent crisis. Such treaties could allow an international body to “force a declared pandemic state to undertake a set of guidelines aimed at reducing the spread of disease within the territory and also prevent the spread of the disease to neighboring countries.” In his opinion, such a treaty would establish protocols for regional and global responses.

If anything, the corona pandemic has shed light on the importance of establishing public health and environmental protection as top priorities. According to Dr. Levin, “public health is just as important to national and international security as military issues.” Dr. Negev sees the corona crisis as “a message for us to think about humans as part of the ecosystem and how we should all interact in more sustainable ways.”