National drone initiative (Israel): Drones Will Take Flight over Residential Neighborhoods and Houses in the Israeli City of Hadera 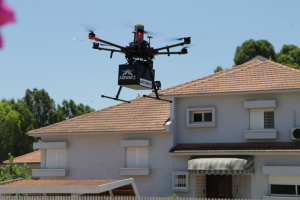 Israel’s National Drone Initiative, which first began its flights over urban areas in January 2021, entered a new phase in its pilot program, which includes flights over houses and above residents in and around the city of Hadera. This is the second stage in a series of eight demonstrations expected to take place during the coming two years, in which tens of thousands of sorties will take place in the skies above the city of Hadera.

The initiative, which originated via a collaboration between the Israel Innovation Authority, the Israeli Ministry of Transport (through the Ayalon Highways company), the Israel Civil Aviation Authority (ICAA) and the Smart Transportation Authority, was established to improve the functionality of drones for the benefit of the public, ultimately helping to reduce road congestion. Likewise, the initiative is working towards creating a national network of air corridors for UAV deliveries of medicine, medical examinations and equipment, eCommerce, and more.

Dror Bin, CEO, Israel Innovation Authority: “The National Drone Initiative is reaching new heights, initiating services to customers. The Israel Innovation Authority sees great value in ensuring that Israeli citizens will be able to benefit from local innovation and enjoy advanced services such as receiving goods delivered via drones to their home. Furthermore, we believe that the technology companies participating in this pilot will greatly benefit from this initiative as it enables them to test their technology in real-world settings, in which multiple drone companies are operating in real time, and as a result improve their performance and their competitive position in the global market. In this current phase of the pilot project, various companies will collaborate with state-funded companies operating drones to conduct pilots of commercial goods delivery including cosmetics, food and medicine, directly to the doorsteps of Hadera residents. Such unique collaboration between the Innovation Authority, the Israeli Civil Aviation Authority and Ayalon Highways is a catalyst for additional public entities such as the IDF Home Front Command, Magen David Adom and United Hatzalah emergency services and other commercial entities which joined this program in order to benefit from the extraordinary capabilities demonstrated in this pilot.” 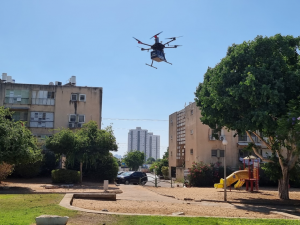 Itamar Ben-Meir, CEO Ayalon Highways: “Managing a smart aerial space with multiple drones flying simultaneously over the heart of the city of Hadera, controlled from the Savidor metropolitan traffic control center in Tel Aviv, demonstrates the technological feasibility of operating multiple drones right from the moment that customers order goods all the way to home delivery of those goods. This represents a substantial upgrade of the National Drone Initiative – which is part of the future traffic solutions led by Ayalon Highways.”

Over the past eighteen months, various activities have been carried out with the aim of building experience, knowhow and familiarity with the regulatory framework necessary to maximize the utilization of rapidly developing technologies while removing barriers and opening up opportunities for participating startups, thus turning Israel into a beta site for conducting such pilot tests.

The first demonstration took place in March 2021 as part of a series of eight demonstrations under the Israel Innovation Authority pilot program in collaboration with the initiative. Five groups of companies operated about 20 drones in the demonstration, flying over 2,000 sorties in the skies above the city of Hadera, conducted under one unified command & control system.

The airspace was managed by an autonomous Unmanned Aircraft System Traffic Management (UTM) system operated from the Ayalon Highways aerial control center – the command & control center of the demonstration. The drones flew about 300 sorties a day over open areas, with each drone simulating one of range of a tasks: food deliveries, transport of medicine and medical equipment, as well as agricultural services.

The first demonstration achieved numerous goals, demonstrating proof of concept of managing a unified airspace for a number of companies controlling an autonomous drone fleet and flying in a multi-drone environment – in a coordinated and safe manner while crossing over roads. These achievements demonstrated Israel’s position as one of the most advanced pilot sites in the world in this field.

The second demonstration in this series began on Sunday, June 20, 2021, with the participation of companies which received the support of the Israel Innovation Authority as part of the Authority’s pilot program managing and operating autonomous drone networks, alongside other companies and entities with drone fleets which were interested in taking part in this first-of-its-kind experiment.

In this second phase of the pilot project, flights are being carried out over residential neighborhoods in the city of Hadera. In addition, there are demonstrations of end-to-end drone deliveries – from the moment the order is placed via an app, up to and including the delivery of the goods to the end customer. This is the first time that drone delivery flights will be carried out within urban residential neighborhoods from key takeoff points in the city, in close proximity to businesses, public institutions, etc.

The flights are operated by the six different companies listed below. They are expected to be joined by the Israeli Police, the National Fire Department and the IDF Home Front Command. The joint flights will be autonomously managed and prioritized by the Ayalon Highways air traffic control center. The autonomous computerized system for managing and supervising airborne drones flying over Hadera can be viewed at this center, demonstrating a situation where dozens or even hundreds of drones – in future scenarios – fly through the skies of various cities throughout the country on various missions, operating in a uniform airspace.

The system will be able to prioritize the various drone flights and clear the airspace when a large aircraft enters or when one of the aircrafts operated by the emergency services organizations enters in case of an emergency.

The companies participating in the demonstration:

As part of the second stage of the demonstrations, the companies will present innovative and unique initiatives for both companies, including an end-to-end delivery process: the customer places an order through a dedicated app, the goods are transferred by the seller to the airfield where the product is inputted into the system and transferred to the delivery drone, the drone takes off autonomously from the airfield and flies to the destination, the flight path is transmitted by video and tracked by the consumer on the app, the app notifies the customer regarding the arrival of the drone and verifies customer ID, the drone drops off the shipment and the app finalizes the process by sending a message to the seller confirming the delivery.

This is the first time that an app has been integrated allowing consumers to order goods and have them immediately delivered by drone, creating an alluring new user experience.

In addition, Cando and High-Lander will carry out deliveries with a variety of companies that have knowledge and experience in commercial shipping such as Ratz Plus, a leading delivery company, and the Osher Ad retail chain, and will also fly medical supplies to a medical center, demonstrating a wide range of commercial delivery processes.

Additional activities relating to public safety will be carried out in conjunction with the IDF Home Front Command, Israel’s Fire and Rescue Services and United Hatzalah emergency services. Within this framework, drone flights will be carried out according to various emergency scenarios in accordance with the lessons learned from the recent participation of Cando and High-Lander in Operation ‘Guardian of the Walls.’

Operation of an advanced command & control system for the management of autonomous drones in a controlled airspace with full autonomous coordination and the execution of tasks by multiple drones in compliance with safety regulations, while factoring in aircraft operated by other parties.

FlyTech operates in the fields of civil engineering and construction, agriculture and renewable energy, and safety and security. SkyLinx is responsible for the development of autonomous airfields in smart cities which allows drones of various types to operate commercially, efficiently and safely from a unified infrastructure.

As part of the pilot program, the companies will practice flying and landing within the urban space to deliver aerial shipments and will also demonstrate the safe transfer of documents to the Hadera City Hall.

SkyLinx will carry out drone cargo delivery missions to demonstrate the airfield concept it is developing.

In addition, the company is collaborating with FlyTech Ltd. and Airwayz Drones Ltd. to develop the overall capability of drone cargo delivery missions carried out beyond the visual line of sight (BVLOS).

SkyLinx is also cooperating with commercial companies such as Flying Cargo and Nespresso to demonstrate the ability to fly commercial goods using drones.

The pilot program is being carried out using the company’s two systems: The MetroDome system for dynamic management of an airspace full of drones, using advanced artificial intelligence that ‘learns’ the airspace and manages the different flight control systems, synchronizing them in the city’s skies – and the AirwayzFly system for the autonomous operation of drones, enabling advanced tasks such as deliveries and security without the need for human involvement.

As part of the pilot program, the company will demonstrate its ‘Soteria’ system, which allows autonomous 24/7 planning, control and monitoring of a large number of drones of different types and for different tasks in the same airspace.

The company will test individual drones and drones linked autonomously, whose sorties are pre-scheduled or remotely planned in real time.

In early 2020, a Government Steering Committee was established to support and promote legislation in order to create a national drone network under the name The National Drone Initiative.

The initiative resulted from the realization that promoting drone operations in Israel required the creation of a suitable regulatory environment via ongoing dialogue between the initiative’s partners, regulatory bodies (CAAI) and industry.

International companies were invited to take part in the project without funding, and many have already expressed interest.

In order to allow drones to fly in an urban airspace, a command & control system is required to manage their flight paths, helping advance the legislative and regulatory framework required for their operation.

Over the past year, over 2,500 sorties have been carried out by different drone companies participating in the National Drone Initiative.