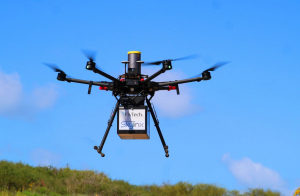 FlyTech has won a government contract to begin a drone delivery pilot in Hadera and Haifa. Courtesy

Will drones replace trucks as the primary mechanism for delivering goods? FlyTech, a company co-founded by Jerusalem College of Technology (JCT) graduates Moshe Lugasi and Eliran Oren that develops cutting-edge air-related technology, recently won a government contract to participate in a pilot program that uses drones with the goal of shortening delivery times and reducing traffic on Israel’s roads.

The pilot program, which is expected to last two years and will be carried out in collaboration with the Israel Innovation Authority in the Prime Minister’s Office, will involve flying drones over farmland in the Hadera area, and then in Haifa, before expanding to other cities. Two other Israeli companies, Airwayz and SkyLink, partnered with FlyTech to create an entity called “Safe” that will conduct the trial of the drone delivery system. Software-run gliders will make the deliveries while flying without any eye contact from a human operator.

FlyTech was founded three years ago by discharged Israel Defense Forces officers from air force UAV squadrons who both became Torah-observant during their army service. At JCT, they were able to balance the priorities of Torah study, academics, and career advancement, a hallmark of the College’s appeal to observant students. With the objective of finding a way to support themselves financially with the remaining time available in their schedules, Lugasi and Oren established Flytech. The company develops and advances the operating capability of aircraft for both government organizations and private companies, bringing military drone technology to the general public for uses including emergency response, agriculture, and construction.

Lugasi and Oren credit JCT with helping them develop the key connections in the drone industry that made their venture a reality. They participated in JCT’s LevTech Entrepreneurship Center’s LAB pre-accelerator program early on in the development of their company. Today, FlyTech’s offices remain on the JCT campus. The company’s employees start their day with Torah study or invest a certain number of hours toward volunteering, which is included as part of their work hours. FlyTech is Israel’s leading provider of search-and-rescue civilian drones and specializes in drone technology.

“We estimate that the product developed in the drone pilot program will be on the market in the coming years. It could transform the delivery industry, as it is expected to replace trucks and make deliveries from logistics centers,” Oren said.

Established in 1969, the Jerusalem College of Technology (JCT) is one of Israel’s most prestigious and unique academic institutions with a focus on science and technology. JCT supplies highly skilled, professional graduates to Israel’s and the world’s high-tech industry. In addition, we are the only institution of higher learning committed to providing the highest quality academic education to diverse segments of Israeli society who would not otherwise have had the opportunity to enter these fields. JCT offers exclusive programs developed specifically for Haredi (ultra-Orthodox) men and women and for other demographic groups.