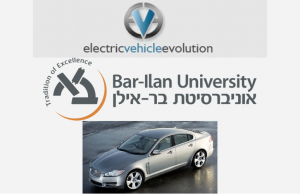 For years Prof. Eli Kolberg’s robots have played soccer – against each other and against teams from all over the world — in the annual Robot World Cup (RoboCup) tournament. Fitted with a camera, a computer, gyro and accelerometer sensors, and independent motion capabilities, each of his autonomous robots is programmed with a software brain that controls it and allows it to communicate with its teammates.

Now, through a new partnership between the Bar-Ilan University Research and Development Company (BIRAD) in Israel and Electric Vehicle Evolution (EVE) Inc., a US-based developer of next generation electric vehicles, the technology developed in Kolberg’s lab at the Bar-Ilan University School of Engineering is headed for the highway.

Is there a red light ahead?  A green light?  A pedestrian?  A yield sign? EVE vehicles will be equipped with the same technology that guides the robots, but, in this case, to assist drivers in keeping their distance from cars in front of and behind them, provide drivers with important information in advance and, ultimately, reduce traffic accidents with collision avoidance. This is known as Advanced Driver Assistance Systems, or ADAS.

Integrated with the dashboard and the info-tainment screen, EVE uses a new user-friendly interface. EVE’s device will provide drivers with real-time information about the health and functioning of every aspect of their cars. Component warnings and failures, together with additional maintenance recommendations, are brought to the driver’s attention.  Battery Management System (BMS) recommendations, including resource availability that will enable maximum integration of battery charging with the driver’s personal linked schedule will also be incorporated, and will be integrated with real-time traffic reports and other relevant information.

Within the partnership between Bar-Ilan University and EVE, the image processing technology and the artificial intelligence functionality developed in Kolberg’s lab for RoboCup participating robots, in addition to driving algorithms developed by Bar-Ilan University Prof. Gal Kaminka, will be adapted by EVE to develop autonomous cars.

Kolberg explains that the team soccer cooperation common among the robots, with regards to which robot will go for the ball and kick it, which one will block an opponent, which one will wait for its teammate to pass the ball to it and which tactics to choose according to the play state, will be adapted in order to enable cars to pass each other safely and within a reasonable time interval.  So, too, with vehicles which identify traffic signs and act accordingly, obey traffic rules while performing turns, drive in roundabouts and so forth.

Next down the road for EVE is the development of inexpensive, autonomous interaction between vehicles for safe, efficient and effective driving, a project upon which the company has already embarked using Kolberg’s technology, which it has named Autonomous Numerous Tactical Systems (ANTS).  “Just like you see ants working together along the floor as a team, such will be the case among automobiles in our autonomous future.  EVE believes that connected vehicles V2V is the future of transportation,” says Adam Tannenbaum, Founder and CEO of EVE.

As part of EVE’s efforts in this direction it has joined the US Department of Transportation connected vehicle project (Dot project ITS.)

“Eventually our device will be able to recognize surroundings and environments and take action, even activate the brakes if necessary,” says EVE Chairman and Chief Strategy Officer Henry Kauftheil.   “Autonomous cars and smart cars that can assist with driving, reduce traffic accidents, avoid congestion and save lives are just a short distance away.” Kauftheil, no stranger to technology ventures and investing in Israel, is a technology pioneer and serial entrepreneur who has mastered the art of transforming groundbreaking technology into commercial success.  He is most well known as chairman of ACG Equities LLC, a real estate holding company with over $1 billion in commercial, office and net-leased properties.  But Kauftheil started his entrepreneurial career in the early nineties.  Recognizing early the potential of the internet for merchants, he founded eMarketplaces, a B2B exchange that grew into a $1 billion technology holding company called ICES (Internet Commerce Exchange Systems).

Kauftheil saw in EVE a potential to commercialize another cutting-edge field of technology.  “The automobile as we know it has been ripe for disruption for decades.  Everyone thought BetterPlace was the answer, but the execution had problems.  EVE has the right execution strategy, and with Bar-Ilan University’s ANTS technology, the sky is the limit.”

See also this article in French.