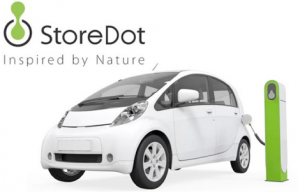 BP has invested $20 million in Israel’s StoreDot, a start-up that claims its batteries can charge electrics cars in five minutes.

The oil giant said Tuesday that its venture capital arm BP Ventures was investing in the Tel Aviv-based firm as it looks to reduce greenhouse gas emissions in its operations.

“Ultra-fast charging is at the heart of BP’s electrification strategy,” Tufan Erginbilgic, chief executive of BP’s downstream business, said in a statement on Tuesday. “StoreDot’s technology shows real potential for car batteries that can charge in the same time it takes to fill a gas tank.”

The number of electric vehicles (EVs) worldwide is growing rapidly and BP is working across the supply chain to support the development of the technologies and infrastructure required to support that growth. BP believes that ultra-fast charging will be key in accelerating the adoption of EVs worldwide.

StoreDot has developed a lithium ion-based battery technology which enables ultra-fast charging for the mobile and industrial markets. Using this technology, StoreDot is also developing a new type of electric-car battery that will aim to achieve a charging experience that is comparable to the time spent to refuel a traditional car. StoreDot currently expects first sales of its flash batteries for mobile devices as early as 2019.

BP is committed to a lower carbon future, aiming to reduce greenhouse gas emissions in its operations, improve its products and services to help customers lower their emissions, and create new low carbon businesses. BP’s work on advanced mobility and developing fast and convenient EV charging networks, including venturing investments in both StoreDot and Freewire Technologies, supports customers who aim to reduce their emissions through EVs.

Dr Doron Myerdorf, co-founder and CEO of StoreDot, said: “Working closely together with a global energy leader is a significant milestone in StoreDot’s direction of strengthening the EV ultra-fast charging eco-system. The combination of BP’s impressive presence and StoreDot’s eco-system of EV partnerships enables faster implementation of ultra-fast charging stations and could allow a better charging experience for drivers.”

David Gilmour, vice president, business development, BP Ventures, said: “The technology to support EVs is advancing rapidly and BP Ventures is committed to identifying and investing in companies that we believe are at the cutting edge of this industry. StoreDot has shown significant progress in the development of ultra-fast charging, both in mobile phone and vehicle applications. BP looks forward to working alongside them, as an investor and strategic partner, to bring their technology from the lab to the vehicle.”